ALBUM REVIEW: Weezer’s Everything Will Be Alright In The End 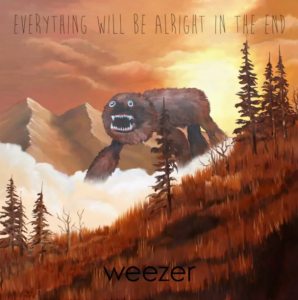 Released earlier this week, Weezer’s Everything Will Be Alright In The End takes us back to a simpler time in the band’s history, delivering on what their fans want most: catchy pop punk and rock and roll music that addresses the usual issues, like fights with Dad and girl drama. Having not released a record since 2010, the songs Weezer produced on their ninth album beg their loyal fan base to get cozy and warm up to lyrics and melodies that will make us wonder why they ever went away.

With their first single, “Back to the Shack,” Rivers Cuomo sings out an apology for the band’s absence and invites their audience to return with them to what they do best. They go back to their roots and to 1994 to bring us signature Weezer hooks and remind us that they “belong in the rock world.”

If you’re a die-hard Weezer fan, Everything Will Be Alright In The End, will help you remember why. And if you’re unsure of your dedication to a band who has been fickle with our hearts over the years, hopefully their new album will bring you a sense of comfort and restore your faith in a group that aims to please.

Weezer - Back To The Shack