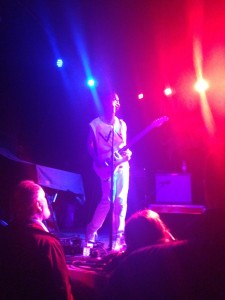 Monday night, the insanely talented and insanely young duo, The Bots owned the stage at The Sinclair in Cambridge, MA. We would have better pictures to prove it to you but, there was a mix-up with the press passes at the box office, so these cell phone pics will have to do! The band wasted no time getting into things, coming out heavy and strong with a song reminiscent of Nirvana and The Pixies; featuring relaxed verses that exploded into loud infectious choruses. This would be the story of the night, as the two brothers Anaiah and Mikaiah Lei who are 17 and 21 respectively, played with the confidence of veterans more than twice their age.

Guitarist and vocalist Mikaiah flaunted his prowess on the guitar, jumping around sporadically

with the soul of pure punk rockers, while shredding riffs that would make Jack White and Dan Auerbach drool with envy. His charisma was infectious, as a crowd that was clearly not there to see his band was left with huge smiles on their faces by the time they wrapped up. His younger brother, drummer Anaiah, was less of a showman, remaining focused as he balanced pounding away on live drums with handling drum machines and keys as well. The two commanded the rooms attention, even at the beginning of their set when there was only about twenty people or so standing in front of them.

The siblings showed a wide range of influence through the entirety of their set, ripping through songs you could hear coming from legends such as Red Hot Chili Peppers, Nirvana, The Black Keys, and more. The band’s new full length, “Pink Palms,” comes out October 14, 2014, and we highly suggest you pick it up and make sure to catch them when they roll into your town.

The Bots - No One Knows