Culture Collide kicks off this week in San Francisco and Los Angeles, CA with a stellar lineup of up-and coming bands and solid established artists. The festival will take place at various venues throughout each city during its individual runs. The San Francisco two-day event starts today, October 14 and will feature Cloud Nothings, Clap Your Hands Say Yeah, Beat Connection and others. The Los Angeles event will follow up starting October 16th showcasing a similar lineup but with the addition of M0, Nina Persson, Quantic and other artists. The event will also feature panel discussions by Yelp, Electronic Arts and Bandpage to talk about the evolving relationships between music and technology. Lagunita, Anchor Brewing and other culinary companies and institutions will be on-hand to provide tastings and participate in the panels.


Cloud Nothings "I'm Not Part of Me" (Official Video) 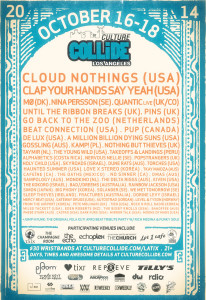 The event will follow-up next week, October 23-24 in New York City with Hunters, Splashh, The Wytches, Gringo Star and others performing at the event.

Tickets to the festival are available here!