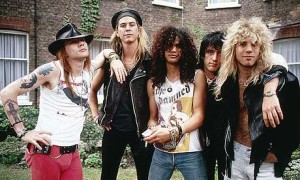 After what was referred to as the “Hell Tour,” the five members of Guns N’ Roses pledged musical and personal allegiance to each other, as they set off on their journey to the top of the rock world. From June 1985 on, they were going to do anything it took to get there, even while they occasionally sabotaged themselves and burnt bridges along the way.

The band’s lineup was finally solidified. Lead Singer, Axl Rose; Lead Guitar, Slash; Bass, Duff McKagan; Rhythm Guitar, Izzy Stradlin; Drums, Steven Adler. For the remainder of 1985, they played any LA clubs that would have them, including The Troubadour, and The Roxy.

Some members of the band kept a side job for extra cash during this time period. Axl worked as a manager at Tower Records, and was part of a scientific study, smoking endless packs of cigarettes for $8 an hour at UCLA. Izzy? Well, Izzy sold heroin, and somehow Joe Perry and Steven Tyler knew Izzy extremely well before the band started to make a buzz.

But Axl was also working on and crafting the songs he heard in his head, to as close to perfection as he could. In early 1986, GNR recorded a demo that already had primitive versions of “Welcome To The Jungle,” “November Rain,” “Yesterdays,” “Rocket Queen,” and “Paradise City.” It was passed along to any publicist, A&R man, or record company representative they could find. A bidding war was about to begin.

The scoop on Guns N’ Roses at the time was, they were good, and they could be great, but somebody better get them recorded before one of the members either died or wound up in jail. LA booking agent Vicky Hamilton became the band’s first manager, and helped them purchase new equipment. She also became their landlord, as members of the band went from crashing at her apartment, to never leaving. Pretty soon they would practically destroy it.

Tom Zutaut was an A&R man for Geffen Records. He had discovered and signed Motley Crue a couple of years before. He seemed to have an affinity for out of control rockers, and it drew him to Guns N’ Roses, who were now the talk of the Sunset Strip, for their music, for their attitudes, for their insanity, and, already, for Axl’s antics onstage. Not only that, but the word around town was that Izzy, Slash, and Steven were developing dangerous heroins habits of their own.

Zutaut went to see them at the Troubadour after a recommendation from a record store employee who always told him who the hot up and coming bands were. “After two songs-I didn’t need to see any more to know they were going to be the biggest band in the world,” Zutaut later remembered. He told someone from a rival record label he thought GNR absolutely sucked, while at the same time thinking about what it would take to bring them to Geffen.

The band had conversations with Zutaut about signing, but they weren’t above using their meetings with people in the industry to milk them for everything they could. That “street attitude” was still very much a part of their demeanor. After all, that was how they had survived for so long.

Aerosmith’s manager, Tim Collins showed interest in managing the band. They had a meeting in a plush, five star hotel with him, where he paid for dinner. But after Collins went to his room and went to sleep, the guys charged all their drinks to his room, and stuck him with the massive bill. Collins lost interest after that.

“Axl didn’t strike me as being particularly savvy or into his career. He was more like a wild animal from the African jungle,” said Zutaut. Whether he was viewed as naïve or not, Axl had a demand for Zutaut and Geffen. He claimed he wanted a check for $75,000 by the end of that particular week, or Geffen wouldn’t be getting Guns N’ Roses. After Zutaut sold the band to his bosses as the absolute next big thing, he called Axl with the news that he’d be giving him that check he wanted. However, Axl had other plans.

“Look, man, we told the A&R person at Chrysalis that if she walked naked down Sunset Boulevard from her office to Tower Records, we’d sign with her,” Axl said over the phone to Zutaut, and he sounded dead serious. Their would be A&R man nearly had a panic attack, but Axl wouldn’t budge. He had promised that if this happened, Guns N’ Roses would be a Chrysalis client.

“My office is on Sunset-I’m going to have to watch until Friday at 6 o’clock, because if she does the nude walk, I’m going to lose the band,” recalled Zutaut. When the clock reached the end of the work day, and she hadn’t appeared, he breathed a sigh of relief. Guns N’ Roses, with all their baggage and their brilliance, was signing with Geffen, and getting into a recording studio as soon as possible.

That night, GNR was to perform at the Lingerie Club. Axl hadn’t shown up, and the rest of the band was in a panic. They were supposed to sign on the dotted line immediately after the show, and their lead singer had disappeared, and was unreachable. Then, ten minutes before the show was to begin, Axl walked in nonchalantly, ignoring the vibes around him. The band pulled it together, and put on a kick ass show, foreshadowing a constant pattern that would continue. They walked on stage as an unsigned band, but left the building with a $75,000 advance, and a record deal.

Kim Fowley, a record producer, and the manager of “The Runaways,” tells a story about seeing Axl right after they signed with Geffen. He came into the Rainbow Bar & Grill (made famous later in the ‘November Rain’ music video,) and showed her a Xerox of a check for $37,500, the first half of their advance. Axl was very proud of the band and their deal, and Fowley offered congratulations. “Thank you,” said Axl, “now can you buy me a drink? I don’t have any money.”

Shortly thereafter, GNR brought Alan Niven aboard to be their manager. Mike Clink was added to the team to produce the album. The sessions were fierce, but not without problems. Slash was dealing with a serious drug addiction at the time, and it slowed up the recording. To maintain interest in the band, while at the same time keeping their mystique, they released a four song “EP” which contained two original songs, “Reckless Life,” and “Move To The City.” There were also two covers, paying tributes to two of their heroes and influences. “Nice Boys,” by Rose Tattoo was on there, and it sounded like it was written for,  or at least about them. “Mama Kin” by Aerosmith closed the EP, and Axl made the song his own.

The EP was released in December 1986, under the title “Live ?!*@  Like A Suicide.”  It was released under the label “UZI Suicide,” which was intended to make fans believe that GNR had released it themselves, thus keeping some street cred. In fact, Geffen financed the recording and release. Another urban legend is that the “Suicide” EP was recorded live, when in fact it was not. The crowd noise was overdubbed in post-production.

Axl and the rest of the band continued to fine tune the songs for their first album, including a ballad Axl had written for his then girlfriend, Erin Everly, entitled “Sweet Child Of Mine.” Slash didn’t particularly like the song, and he added a carnival like intro to the song, which he stumbled upon by just goofing around with silly riffs.

That song, and the band’s debut album, “Appetite For Destruction,” would be released the following year. The band continued to tour, getting better every time they played. Geffen allowed them extra recording time so the album would be as good as possible. And Tom Zutaut waited patiently, for the band to have the success he predicted in a small LA rock n roll bar, success which would hit the band like a ton of bricks in the next couple of years. Not only did it nearly break up the band, but it almost killed three of its members.