Finch broke onto the post-hardcore scene with 2002’s “What It Is To Burn,” a pivotal album in the scene, that the band recently celebrated the anniversary of with a tour which saw them playing the fan favorite front to back every night. The band reformed for that tour after having been broken up for a couple years, and on the fuel provided by their reunion anniversary tour, wrote a killer new album, “Back To Oblivion,” their first full length in nearly a decade. B-Sides caught up with the guys at their stop in Boston on Monday, and chatted about the new album, their return to the scene, and more.

You guys previously worked on a third full length album that didn’t come to fruition, was there any major contributing factor to it working out this time? Did any of that material end up on this album?

Nate: Uhm, no not really. The stuff we were writing for the third record the last time, we kinda just threw out and left it there, then stopped playing. When we came back to the album this time, it was all new material, most of that stuff got leaked anyways. So we just started over.

Was it more natural this time around?

Randy: It’s always kind of a struggle to get everyone on the same page for an album. I think that the more songs you write, the more it starts to flesh itself out, then the real songs can really present themselves and rise to the top. It just takes a lot of work, it’s not really hard for us to write songs, it just about picking the right ones for the record.

You guys have broken up and gotten back together a few times, how does it feel to still have such a dedicated following?

Nate: Yeah, it’s trippy. I was just talking to some of our meet and greet fans earlier, and it’s just weird to me, cause to me that whole first record was just this era that I feel is over now. Like, as if people wouldn’t want to come to the shows if we kept playing but, they do so, I guess as long as there’s still fans that’s reason enough to do it. We’re thankful people have stuck around and want to see us play over and over.

Kind of speaking to that, you guys have sort of joined the club, per se, of bands that have been doing ten year anniversary tours of their breakthrough albums, did you guys think “What It Is To Burn” would have such a strong following so many years later?

Nate: Not when we were writing it.

Randy: Yeah, not back then.

Nate: I mean, I guess I get it now because there’s people that still want to hear records from that era but, back then we weren’t like “This is gonna be huge,” we were just playing. It was a little trippy to do the ten year, it put it in perspective.

When you guys go on tour now, is it predominantly fans who were around back when you guys started, or is it more of a healthy mix of old and new fans?

Nate: I think it’s a mix and match. Y’know, there’s a lot of die hard bird fans, people that grew up with it, and there’s a lot of new fans. I met a kid today who had never really heard us before, and he’s stoked to be here.

Alex P.: We did Warped Tour, and I think that introduced us to a lot of new fans.

How has reception been to playing songs from the new album on tour?

Nate: It’s been really good so far. We play, I think, four new songs in the set? Some people sing along with them already, some people maybe don’t know them so well so they’ll groove along but, it’s been really positive. 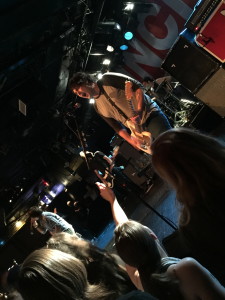 Alex P.: Since we actually put them put I think it’s been a better reception. At first a couple months back we use had a couple songs out for a teaser but, now that the albums out and people get to see it, they’re getting familiar with it, it’s been awesome.

Are there any bands you toured with back then that you’re still friends with or see on the road now?

Alex P.: I mean a good amount of them. A lot of those people end up being your good friends.

Alex P.: We see the New Found guys every once in a while.

Randy: A lot of the bands are broken up but, we’ll see like, Brian from From Autumn to Ashes, he was at our show in New York the other day. Tonight we’re gonna see Chris, he used to be in Vanna. We’re friends with a lot of these people still, wether they’re in a band or not.

Nate: Yeah, even bands we weren’t close with back in the day, like Saves The Day, we recently befriended them. They’re awesome dudes, and to me they’re from the same era of music, so it’s cool to stick around and end up meeting and knowing people now that we knew of back then, and we’re kind of in the same boat. The bands that are still going, that people still listen to, it’s cool.

What do you guys listen to nowadays, is it any newer bands, or mostly older stuff?

Nate: I usually stick to older stuff but, there’s this one new band that I’ve been listening to exclusively that’s new, Royal Blood. They’re a two piece from the UK, I’m really into, they’re awesome. Other than that I kinda stick to oldies, the stuff I grew up with.

Alex P.: I was gonna say them. I’m still listening to Nine Inch Nails, and rock, and I think we all mostly stick to stuff we grew up with, aside from a few choice ones. I’m still putting on a Nine Inch Nails record, that’s the last band I went and saw when they came around. That kind of show.

Randy: I’m really into this band Nothing. They’re fucking incredible, and it does remind me of the stuff I still listen to when I was a kid. Like Hum, it’s really Hum-y, and sorta Deftones-y but, it’s not heavy metal. It’s just heavy, really good.

If you guys could tour with any band, friends, or just dream band, who would it be?

Randy: Yeah touring with the Deftones would be great. Foo Fighters.

b-sides on air b-sides.tv back to oblivion Deftones finch foo fighters from autumn to ashes hum new found glory nine inch nails nothing royal blood Saves the Day vanna what it is to burn