After an impressive twelve year run, Florida quintet Anberlin have decided to call it quits this year. The split seems to be an amicable one, with the band embarking on a final world tour before they part ways. The tour brought them to Boston this past Wednesday, where they played a packed House of Blues.

The night kicked off with local act USA, USA, USA who performed tracks from their album where nearly every track is a girl’s name. Their cover of “Girls Just Wanna Have Fun” was reminiscent of the pop-punk covers of pop songs of the past but still had the crowd bobbing along.

Next up was Mike Herrera, better known as the frontman for long running pop-punk outfit MxPx, tonight it was just him and a six string. Herrera did an admirable job, even throwing in a quick cover of “Shake It Off.” As good as Herrera sounded, it seemed like an odd choice to sandwich an acoustic performance between two full bands. The performance was good but, was a little too tame, and the crowd was noticeably half-interested.

The opening acts did their jobs to warm the crowd up, however, there was no comparison to the intensity and emotion for when Anberlin hit the stage. People came to say goodbye to Anberlin, and Anberlin came to make sure it was one hell of a goodbye. The band exploded onto the stage, wasting no time getting into things, they barely stopped to breath for the first few songs they tore through seamlessly. Anberlin played music from all across their seven album discography, reaching as far back as their debut “Blueprints For The Black Market,” making sure fans old and new got a taste of everything they wanted to hear. Starting off with “Never Take Friendship Personal”, the crowd responded enthusiastically to the band’s staple songs “Paperthin Hymn”, “Impossible”, “The Resistance” and even played “Glass to the Arson”, which hadn’t been played much, if at all during the tour. “Readyfuels” got the crowd in a frenzy as many were singing along to nearly every song performed from their breakthrough album, “Cities”. Ending the main set with “Godspeed” and the radio hit, “Feel Good Drag”, Anberlin certainly knows how to throw a goodbye party, and while their fans surely would love to hear more, the band gave them the most complete goodbye they could’ve asked for. Make sure you catch them if you can, because it could be the last time you ever do. 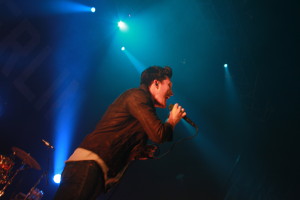