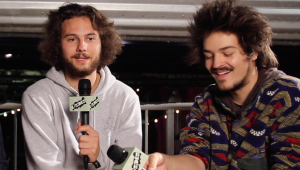 The track “Stolen Dance” by German duo Milky Chance dominated the indie rock/alternative charts for most of the summer of 2014. The song was released late 2013 and escalated rapidly, garnering larger audiences for the band as they toured Europe and gained them spots at numerous festivals. Comprised of singer/songwriter Clemens Rehbein and DJ Philipp Dausch, Milky Chance met while attending high school and formed in 2013. It didn’t take long for the pair to gel as they released their debut album, “Sadnecessary” shortly thereafter.

B-Sides On-Air caught up with Milky Chance during a recent visit to San Francisco. During the interview, the duo spoke with B-Sides On-Air host, Pete Mar, about their formation, the rapid ascent in popularity of “Stolen Dance” and more.

Check out the interview-