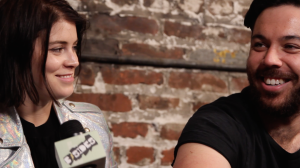 Three years have passed since the self-titled debut by Milo Greene and the five-piece is finally back with their follow-up, “Control”. Although their introduction to audiences showcased more of an indie-folk sound, Milo Greene has evolved with this second offering, as “Control” focuses on percussion and contains more up-tempo synth-laden tracks. The result is an album of catchy and dance-laden tracks while retaining the harmonies and rich vocals the band is known for.

B-Sides On-Air met up with Marlana Sheetz and Graham Fink of Milo Greene during their recent performance at the Independent in San Francisco. The pair spoke with B-Sides host, Pete Mar, about the band’s evolution and more!