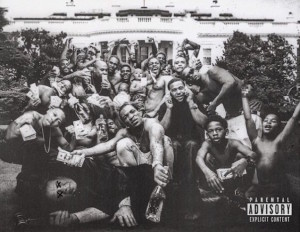 To Pimp A Butterfly, Kendrick Lamar’s second album, is full. Packed with so much sound, so much instrumentation, it’s difficult to view this as a rap album. And yet, even with the vast amount of production, Lamar’s words come as powerful as ever.

Fans were surprised to see Lamar’s album, set to drop on the 24th, on both iTunes and Spotify on Monday, a full week before the scheduled release. It surprised even TDE CEO Anthony Tiffith, who began firing blame at Interscope. Regardless of reason or blame, we’ve gotten the album early, and it is a gift. Just ask Kanye West.

Lamar rose to fame with his critically acclaimed mixtape Section 80, gaining more accolades for Good Kid m.A.A.d City. Butterfly is far different than those projects, focusing more on jazzy sounds mixed with an old school hip-hop feel. It’s fitting, then, that the outro track, Mortal Man, has Lamar asking 2-Pac about the state of hip-hop and the poverty of our nation (Lamar placing himself in a 1994 interview with Pac).

What struck me hardest about this album is that it doesn’t contain radio hits, nor does it have any dark and moody production. Even the heavier themes in Lamar’s lyrics are touched upon over snappier beats. This can be best heard on the track U, where, either in character as a childhood friend of Lamar or an alternate personality, Lamar laments on his life, if he deserves to live at all.

To Pimp A Butterfly is an album to treasure. History is difficult to gauge as it’s being made, but with his first two albums, it’s important to recognize that we very well could be looking at one of the greatest rappers ever. It’s far too early to judge, but if his career continues on this trajectory, he’ll be considered for the title, in the same conversation with his idol 2-Pac.

You can listen to Kendrick Lamar’s album here: