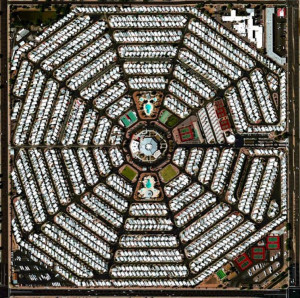 Modest Mouse return from their eight year record hiatus with the triumphant new “Strangers To Ourselves.” The album is sure to be a fan pleaser as it doesn’t reinvent the wheel too much in the way of Modest Mouse. Not that they needed to reinvent the wheel anyways, it’s been a smooth ride for these guys, yet to really deliver an album fans found disappointing.

Things start serene with the title track, a song which begs to be played while a cool beach breeze blows gently through you. The song transitions very nicely into the first song the band released from the album “Lampshades on Fire.” The song has been in the bands live set for some time now but, the time they’ve had to refine it have made it one of the strongest on the album. It’s truly a classic Modest Mouse track, one that would fit as nicely on their last few albums as it does here, with the sort of vocal harmonies and instrumentation they’ve really grown into over the years. Possibly the best song on the album, is the longest, with “The Ground Walks, With Time in a Box,” which sees the band jam out for the last minute or so. The whole song is really spectacular but, the end is really what drives it home.

“Coyotes” is reminiscent of something you might hear on The White Album but, y’know, if Modest Mouse wrote it. We’re pretty sure after hearing the song, they should go ahead cover something from The White Album. It’d probably be rad as hell. One of the biggest risk takers on the album is “Pistol (A. Cunanan, Miami, FL. 1996,)” due mostly to the use of electronic drums that have an almost Nine Inch Nails effect to them. The song has the really bizarre sound that Modest Mouse usually stray into at least once an album but, ultimately is probably the worst part of the album.

Modest Mouse probably won’t gain any new fans with “Strangers To Ourselves” but, they’re sure to thrill the purists. Some might cry the sound is stale but, there’s really no pleasing everyone ever, is there? This isn’t the bands best work but, it’s a solid effort from a band that’s going for 22 years now, and how many bands can say they’re even still together, let alone still putting out good music after that long? Not many.

modest mouse review strangers to ourselves the beatles white album