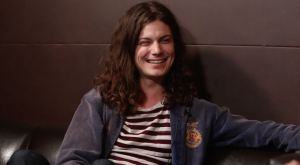 BØRNS got the bug for the arts and performing at an early age, starting with piano lessons at six and entertaining the neighborhood kids at various parties with his magic act. His passion and drive for learning music garnered him a scholarship to the Kendall College of Art and Design in Grand Rapids, Michigan when he was 13. BØRNS honed his skills over the years, mastering numerous instruments and eventually wound up in Los Angeles, CA after spending a brief stint in New York City. Now signed to a record deal, BØRNS released the debut EP, Candy, performed at CMJ, SXSW and is slated for numerous festivals in 2015 including Lollapalooza.

B-Sides On-Air host, Pete Mar, caught up with BØRNS in San Francisco to talk about his early beginnings, working with his good friend, Zella Day and more.