HARD Fest’ goHARD Miami was a success. This weekend its Dallas’ turn and shortly after, HARD Fest will be taking over your city. HARD founder and artist, Destructo had a lot to say about upcoming projects .

As an artist that not only throws parties but also takes part in them, Gary Richards (better known to music fans as Destructo), was happy to share that both parts work with each other. As an artist that has performed at several festivals, Richards knows what other artists want and he understands the music so he knows how to put everything together in his own events. Being familiar with all the artists, he can better curate groups to perform alongside one another. He has upcoming festivals in Dallas, Toronto, Colorado, Tokyo, Australia and even though he doesn’t plan on creating any new festivals, he has a list of new things he want to improve on his ongoing concerts. 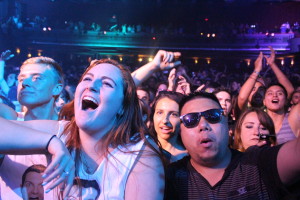 The reason as to why Richards created HARD festivals was simply to provide music fans with a good time.  He wants to create an experience that leads to “losing yourself from the real world. You can come for 8 hours and it takes you aways from all your problems”. Certainly, that was the situation at goHARD Miami. The line-up had a little of everything; psychadelic to dubstep to rap to techno. All the artists on the line-up gave their best and had bangers that kept the crowd going from start to finish. “ I like bring quality music, things I like and believe in.” Richard’s line-up turned up the volume this past weekend with performances by Destructo, Griz, TOKiMONSTA, WhatSoNot, Rae Sremmurd, Bro Safari, Mat Zo and Dillon Francis.

“We’re trying to find places where we can expand our brand” he stated when asked what had brought these extensions of HARD Fest. With a growing demand for music festivals across the nation, Richards biggest goal is to have more goHARD events in places that are not already cluttered by other music festivals. Although South Florida is already a prominent EDM region, Richards was excited to have partnered up with LiveNation in order to bring HARD to a new venue near the beach.

When asked about future events in Miami, Richards stated that “playing the sunrise is the best”. Describing his sunrise sermon sets– a set he usually starts around 5 AM and goes on till the sunrise- he went on to tell us that those were his weekend plans at Chicago right after Sunset Music Festival and right before goHARD Dallas.  With an over the top schedule consisting of back to back shows that span over miles of travel, he shared his gratitude of the being in Miami. After visiting the beach, Richards decided that he would like to come back to host one of his Sermons to see the sunrise along fans on the East Coast.

As Destructo, Richards is  working on releasing 10-15 new tunes before going out to HARD Summer and the HARD Fall events. He plans to keep doing what he does while aiming to make the next event better than the last. On its third year, HARD Summer in LA later this summer is already causing up a stir with its newly released line-up. Expect many great features to be added to this festival and keep out an eye for this weekend’s event in Dallas.