Sunset Music Festival 2015 could easily be one of the most underrated festivals this year. All artists that performed had amazing music toshare. The positive vibes all around the venue were infectious. The bright lights were as shocking as catching Hulk Hogan and singer Juanes greeting fans from the LIV lounge.

It was not until the first day of SMF 2015 that it became clear why Tampa is known as the lightning capital of the world. For a brief half hour, dark clouds seemingly appeared from nowhere. Many attendees waiting in line to enter the festival were turned away and asked to find shelter as the music in the nearby stages was shut down. Announcers advised all attendees to find shelter right as the torrential winds and pouring rain forced everyone into the stadium while the lightning crashed all around.

The rain didn’t stop anyone once the music continued and the mud puddles began to take shape. Apart from the inconsistent food trucks sprawled around the campgroun, getting from stage to stage was a good walk consisting of vibrantly dressed groups of people dancing their way to the next show. Upon coming across people from all over southern US, the good vibes were undeniable. Everyone had a smile on their face as they made their way through the canopy of enormous tropical flowers and lively decor. Striking performers roamed the fields showering masses with glitter and positivity.

All the new features SMF offered were fresh in design. The cool down maze was unexpectedly uneventful; it consisted of a large tent with barricades forming a theme park type line that zig zaged from the front to the back of the tent forcing you to walk all around the maze before reaching the end. Inside the tent there was nothing other than a large air conditioning system that made you feel as if you were stepping into a large refrigerator. 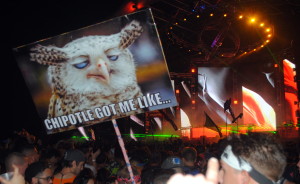 An assortment of creatively designed totem poles flooded over the crowd as performers on stage had the crowd cheering as they maneuvered different dance props. The most capturing dancer was the Hooper that managed to slinky on about 15 hula hoops while performing for Audien.

The level of consistency and quality in music performances were unparalleled to that of  any other music festival sofar. Each set was constant and there was not a single dull moment.  Time flew while spinning around to Oliver Heldens before running off deeper into the crowd to catch Skrillex. The length of each song was perfect as was the blending   from one genre to the next. Just to tease, Sonny went ahead and released a preview of his new song before running off to make way for Tiesto.

Meanwhile, Tchami had been warming up the stage for Duke Dumont will with a killer set. Right after, without saying a single word through the whole set, the Duke threw down songs that had the crowd flowing like waves. As the fire works went of in the distance, it was hard to tell apart the difference between that moment and a perfectly directed music video.

On the second day of the festival, Flosstradamus announced they had just gotten back from performing at EDC NY to close SMF 2015. Already warmed up, and in full riot uniform, they jumped into the crowd as thousands of fans threw up their HDY! sign. With the rowdiest crowd Tampa had ever seen, the duo dropped remixes that killed. It was astonishing to see the crowd singing and dancing even after the performers had left the stage announcing the end of an unbelievable festival.