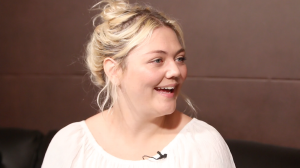 Elle King is no stranger being in the limelight. The daughter of comedian Rob Schneider and actress London King. Her parents divorced while Elle was quite young, but she still showed an interest in performing. Although she had a few minor acting roles (Deuce Bigalow, The Benchwarmers), King had a passion for music and experienced recognition for the song, “Playing For Keeps,” which was featured as the theme song for VH1’s “Mob Wives Chicago” and chosen for the national TV ad campaign for “Mad Men.” The track was featured on her debut EP, The Elle King EP, which she supported touring with the likes of Ed Sheeran, Train, and Of Monsters and Men. King’s debut album, Love Stuff, was released in early 2015 and has already garnered radio play with the single, “Ex’s and Oh’s”.

B-Sides met with King during her tour stop as the opening act for James Bay at The Independent in San Francisco. King spoke with B-Sides host, Pete Mar, about how potential suitors deal with her frank and open style of writing about her relationships, what love songs are her favorite and more.