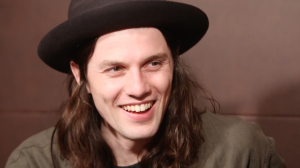 Singer-songwriter James Bay grew up in the small town of Hitchin, England with hardly any aspirations of going out to explore the world. His love of music changed that perspective as building a following and becoming successful required him to take his music on the road. Bay’s musical influences are attributed to his up-bringing as he started playing music at age 11 and was surrounded by his parents’ music collection that ranged from Eric Clapton, The Rolling Stones and Van Morrison to Motown and Greenwich Village folk. After leaving home, Bay worked hard busking and performing at open mic nights until gaining recognition at his college’s showcase. Securing a record deal happened by chance as a video of one of his performances was spotted by an executive at Republic Records. Bay’s debut album, Chaos and The Calm was released in early 2015 and the song, “Hold Back The River” has become a success.

B-Sides met up with James Bay during his U.S. tour stop at The Independent in San Francisco, CA. Bay spoke with B-Sides host, Pete Mar, about his first time in San Francisco(which also happened to be his birthday), how the song “Hold Back The River” came about and more. Check out the interview: