Camp Bisco 2015 splashing in this weekend 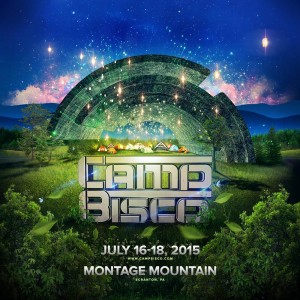 Imagine a music festival at a water park in the middle of a forest with some of the best acts this summer- that’s Camp Bisco. For the first time since 2002, Pennsylvania is opening its campgrounds in Montage Mountain for thousands of music fans this weekend.

This three day festival, taking place July 16-18, has been turning heads all summer. Produced by Live Nation Philadelphia/New York in partnership with The Disco Biscuits and association with talent buyer Ben Baruch, this year’s acts are larger than ever. Headliner include The Disco Biscuits, Pretty Lights, STS9, Big Gigantic, Bassnectar and more.

As if the artist lineup wasn’t enough, the campgrounds will be surrounding an all access water park. The venue will be featuring a wave pool, water slides, water rides,a lazy river, volleyball courts and a Zip-line over the festival.

Its thirteenths installment has a great line up  with a variety of artists to look out for:

Trollphase – This crazy hardcore dubstep artist is bringing back the original dubstep. His sets are heavy, dark and not for the weak hearted.

Louis Futon –  Opening for Kill Paris a few months ago, his performance was surprisingly fun. He incorporates trap with an 80’s synthetic vibe.

Rufus Du Sol – The Australian DJ brings the newish summery sound that has been taking over the charts this year. The marimbas and housey progressive songs are good to chill and hype enough to vibe out to.

Option4  –  If you are a fan of deep house and want good uplifting vocals , this artist is great. The fun and light songs are particular to Option4’s style and groove.

Kill the Noise – Forever a favorite. This electro act will surely throw in some great mixes of recent songs along with old time favorites. Producer and DJ Jake Stanczak has a hard attitude for aggressive drops.

Classixx –  Classixx is a classic group that has to be seen at least once. The disco electronic sets are groovy and worth catching up to for all the great remixes they’ve been releasing these past couple of months.

Ape Drums – For moombahton fans, this artist is growing fast in popularity. After mixes with A-Track and more than a couple of Mad Decent artists, the dancing has evolved and hips will be shaking.

Jauz – If you haven’t hear by now; Jauz has been taking over the waters this season. True to his reference, his songs are very much like the themes song of thriller movie Jaws. His songs usually start off soft and delicate but creep up on you and then attacks.