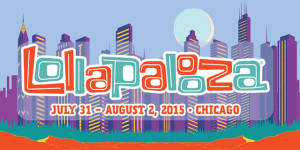 As you may already know, Lollapalooza kicks off Friday at Chicago’s Grant Park. The three day festival will feature over 100 acts, spanning all genres. Headlining this year are Paul McCartney, Metallica, and Florence + The Machine. Here are five acts you should definitely not miss this weekend:

The best Britpop to come out in years is being made by a group of non-Brits. DMA’s, the Australian trio hailing from Newtown, an inner-Sydney suburb, began generating buzz earlier this year with the release of their debut single ‘Delete’. ‘Delete’ would later find itself on their first release, an EP aptly named DMA’s EP. Channeling Blur or early Oasis, DMA’s EP overflows with energy and breathes new life into an important era for music.

Jessica Hernandez & the Deltas released their critically acclaimed debut album, Secret Evil,  last fall. Since then, the band has been touring more or less non-stop, creating more and more fans with each stop. Hernandez & the Deltas newest track, ‘Don’t Take My Man To Idaho’ doesn’t miss a beat. Fans of the outfits R&B-infused neo-soul will feel right at home with this latest offering. Jessica & the Deltas will be playing 3 sets this weekend, including a Lollapalooza after show at Park West with Misterwives on Friday night; that’s 3 chances and 0 excuses.

The jazz trio hailing from Toronto, Canada initially gained recognition for their jazz interpretations of popular hip-hop songs, including a series of Odd Future covers that, with the help of Odd Future’s own Tyler, the Creator, went viral. Since then, the trio has released multiple albums, featuring both covers and original pieces, and have produced tracks with artists like Earl Sweatshirt and Danny Brown. Most recently, BBNG released a collaboration album with Ghostface Killah entitled Sour Soul.

The second set of Australians to make this list, the brother and sister duo have been producing their own brand of intimate, often pop-infused, folk music for the better part of a decade with no signs of slowing down. Together the duo have released three albums, as well as multiple solo efforts. After a brief hiatus to explore said solo work, the siblings reunited last year, releasing their third studio album together, the self-titled Angus & Julia Stone. Angus & Julia Stone is the duo’s strongest release to date and should translate to one of the most memorable sets of the weekend.

As You may remember, we covered Halsey at a bit more length in a recent On-Radar piece. Well she is also on the bill for this weekend and it definitely won’t be a set to overlook. The new queen of dark, electro-pop, Halsey exploded onto the scene late last year with the release of her debut EP, Room 93. Since then, she has been touring with Imagine Dragons and gearing up to release her first full-length album, Badlands, featuring her latest hit, ‘New Americana’.