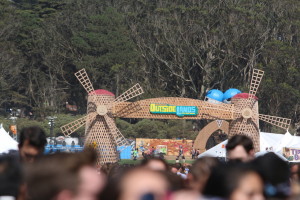 Phew, another Outside Lands festival is in the books! The 2015 version brought all that was wacky, wild, and wonderful; Outside Lands bills itself as San Francisco’s premiere summer music festival, a title that it did not relinquish this year. From the first notes and lyrics from Natalie Prass, The Same Chase, The Easy Leaves Duo and DJ Justin Milla on Day One to the very last by Sir Elton John, Outside Lands 2015 was hands down a memorable event and success. Festival attendees had a myriad of choices to fit whatever mood they were in, whether it was the smooth sounds of Broods, the raw rock sounds of Wolf Alice to the SoCal reggage stylings of Slightly Stoopid, legendary rocker Billy Idol, violinist/EDM/hip-hop performer Lindsey Stirling or the energetic set by DJ Mustard.

Friday kicked off with a bang, as the abnormally (for summer in SF, that is) sunny weather seemed to cause many festival goers to take the entire day off work and check out the earlier acts of the festival. Robert DeLong returned to San Francisco to perform his one-man show at the Twin Peaks Stage, playing a set filled with his unique brand of electric dance music, complete with Wii remotes and joysticks to control his beats. Over at the other end of the festival, First Aid Kit was soothing the Lands End crowd with their folk-­rock blend, but managed to keep their set fresh by slipping in a ferocious cover of Black Sabbath’s “War Pigs”. At the Sutro Stage, England’s Glass Animals had the crowd grooving to their slippery indie­ rock, highlighted by their breakthrough songs, “Gooey” and “Black Mambo”. Alternative­ rock legends Wilco provided what could be considered the day’s nostalgic early­ 2000s throwback. As the sun set, the Panhandle Stage welcomed the reggae dubbed sounds of Iration, a perfect segue into the darkness. Night ­one headliners Mumford & Sons quickly warmed the crowd back up, with their well­-known tunes being shouted out into the night as attendees were spotted running to their set from other parts of the grounds just to sing “Little Lion Man”.

Saturday’s weather was a little drearier than Friday’s sunshine, but that didn’t stop the crowds from filling in early. It seemed like instead of viewing the clouds as a negative, the festival goers saw it as an opportunity to get less sunburned than they had the day before. A standout early act on the Polo Fields was the singer­-songwriter Mac DeMarco. The dreamy indie pop soothed the hungover field into a happy daze with hits from his most­ recent mini­-LP “Another One”. Cold War Kids followed up, revitalizing the crowd with their stylish and quick cutting tunes. On the other end of the festival, chilwave multi­-instrumentalist Toro y Moi was performing his grooving tunes complete with a backing band at the Twin Peaks Stage. Back on the Polo Fields, the action was really heating up as rock­-god Billy Idol began tearing through his quite impressive catalog of hits. By the time he whipped off his shirt midway through the set there wasn’t an attendee around could complain about his perhaps a bit flabby midsection as we were so wrapped up in dancing with ourselves, if you will. Tame Impala stormed the stage soon after, turning the entire stage into one giant psych­-rock experiment, complete with rainbow colors in the background. The rocking spirit stayed alive all night on the Polo Fields as festival veterans the Black Keys jumped onstage to tear through their bluesy catalog, satisfying both old and new fans with a setlist picked from their entire career. And while the Black Keys and Kendrick Lamar were billed as co­-headliners on Saturday night, the crowd seemed to judge Kendrick as the true leader. Perhaps because the Keys began a bit earlier fans left earlier as well, but there was certainly no extra space around Twin Peaks as the rap­-savant blazed through his now impressive array of hit songs. The crowd seemed to know every word of every hook, jumping and pumping their arms up and down to the rhythm. Except for one moment when Kendrick perhaps hyped up a Dr. Dre appearance only for nothing to come of it, there wasn’t a letdown for his full set.

Early Sunday morning always seems to be a drag at festivals. After a few days of dancing your feet off, people are tired and need a break, but this year there was the allure of something to keep the crowd strong for: Sir Elton John! This enthusiasm was shown bright­ and­ early, as the DMA’s kicked off Sunday’s set from the Sutro Stage. The Australian rock­ group ran through their set with many an incoming festival attendee stopping by to watch as they entered, gaining folds of new fans. On the main­ stage, Nate Ruess played a faultless set, but it seemed like most of the crowd was waiting for him to play the hits from his days in Fun, which he did at the end. Next up was Hot Chip, who ignited a huge­ hipster dance party for a mid­-afternoon burst of energy. They ended their set with a fantastically done cover of LCD Soundsystem’s “All of My Friends,” the song which ironically also ended LCD’s final show ever. On the Twin Peaks end of business, the Seattle­-based duo Odesza was blasting their electronic wares, as the crowd danced on shoulders and even hoisting giant inflatable dinosaurs in the air. Back on the Polo Fields, British crooner Sam Smith (whom we heard referred to as “the male Adele”) was lulling the crowd into a happy stupor as he played hits off his debut album “In the Lonely Hour”. At the Sutro Stage, a healthy­ sized crowd was consuming the sunny­ reggae music of Slightly Stoopid, but the real mass was gathering back at the Polo Fields, waiting for Elton John to begin. And begin he did, strutting out in his bright blue bedazzled Captain Fantastic jacket and pants, waving and pumping up the crowd as the opening chords to “The Bitch is Back” rang out across the stage. From then on, there was hardly any rest, as two full hours of hits poured on us without stop. Elton seemed to end after an extended jam­-filled version of “Saturday Night’s Alright for Fighting”, before re-­emerging onstage for a raucous encore of “Crocodile Rock”. And while Sir Elton perhaps couldn’t hit all of the highest notes in his songs anymore, the crowd certainly could, unfailingly filling in the gaps to “Bennie and the Jets” and “Tiny Dancer” when Elton couldn’t. It was the perfect ending of happy optimism that rushed into the crowd and carried them on into the San Francisco night, waiting until next August to repeat this great festival experience all over again.

Outside Lands outside lands 2015