VIDEO: Outside Lands 2015 Interview – Robert DeLong Talks In The Cards 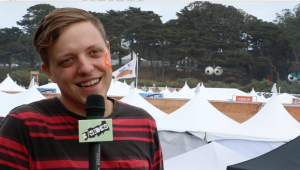 Robert DeLong performed an energetic set during the first day of Outside Lands 2015, as the one-man band showcased some of his new material, including the latest alternative radio hits, “Long Way Down” and “Don’t Wait Up”. DeLong has kept busy since releasing his debut album, Just Movement in 2013 with numerous tours and appearances. The one-man performer barely took a break to record the follow-up, In The Cards, which is slated to be released on September 18, 2015.

Robert DeLong spoke with B-Sides On-Air host, Pete Mar, about what we may expect from his new album, the history of Golden Gate Park and more!