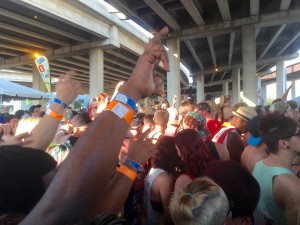 Mad Decent Block Party is now its eighth year and has grown to become one of the largest festivals on the circuit. The event bills itself as a block party with a family feel aesthetic and lives up to that statement if your family knows how to party. This year’s lineup features an array of names in the EDM space including 4B, Alion Wonderland, Borgore, Bro Safari, Cashmere Cat, Cut Copy, Die Antwoord, Dillon Francis, Sam Feldt and more. With each city/region getting a different lineup, the event has been a go-to party during the summer. Mad Decent Block Party stopped in Dallas this past weekend and for the third year in a row, put on a show hotter than the Texas heat.  The excitement was apparent and contagious even before entering the venue.  The heat did nothing to burn out the good vibes all around or stop the dancing from hundreds of festival-goers decked out in neon.  The line-up this year leaned more towards dubstep than the previous years, with openers Gent & Jawns kicking off the afternoon with a bang.  The DC duo’s Moombahton mix set the tempo and mood off on a high note.

It was easy for the crowd to forget that everyone was under a bridge and not in Vegas at EDC when Party Favor took the stage.  His set was a highlight for those who still reminisce on Dillon Francis’s Mad Decent Dallas headlining performance from the previous year.  Although Party Favor dropped a few of Dillon’s tracks, including his remix of “I Can’t Take It”, he set himself apart from his friend and fellow Mad Decent performer.  Party Favor is for sure someone to watch.

Jauz took the crowd to the trap house with a set designed to get everyone twerking – or  jumping at the very least.  I Love Makonnen got everyone hyped about “Goin Up On a Tuesday” as well as yelling that they “Don’t Sell Molly No More”.  The self-made rapper, singer, and producer then performed his latest hits, “I Like Tuh” and “Wrist” leaving everyone recharged and wanting more.

TJR’s set was definitely a turning point as far as the mood of the crowd went.  Halfway through his set, it was almost impossible to find any one person not jumping to his signature bounce tracks, all hands in the air.  TJR spun new tracks like “How Ya Feelin” and “Mic Check” as well as favorites “A** Hypnotized” and “Ode to Oi”.  TJR’s hour on stage was so much fun, it seemed to have gone by in no time by the time Bro Safari was up.

However, the response from the crowd to Bro Safari was unbelievable.  Looking around, it was clear to see many people had come just for this.  The now Austin- based performer, joined on stage by his hype man, did not disappoint his fans with a high-energy set of tracks like “Pull It” and  “No Control” accompanied by some crazy visuals and lights.  Can you picture tons of people all spitting Biggie at the same time?  Well that was the scene once “Scumbag” dropped.  Borgore unleashed the crowds ratchet side as a perfect lead up to Skrillex.  Surprisingly, no cake was thrown.

Skrillex closed out the night with a truly memorable performance.  He connected with fans throughout his set, taking his own pictures and videos as well as playing some of his most-loved older hits like “Boomerang” and his collab with The Doors, “Breakin’ A Sweat”.  “Lean On” and “Where Are U Now” created so much energy as confetti cannons exploded over an electrified crowd, ending one hell of a day.  The Mad Decent Block Party continues through the rest of the summer, wrapping up in Chicago.