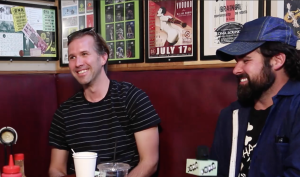 Big Talk is comprised of quite a few familiar faces, showcasing the collective talents of lead singer and guitarist Ronnie Vannucci (The Killers), bassist John Spiker (Filter, Tenacious D), guitarist John Konesky (Tenacious D), guitarist Taylor Milne, and drummer Brooks Wackerman (Bad Religion). The band formed in 2011 when The Killers announced their plans for a hiatus. As Killers band members stretched out with their own projects, Vannucci reached out to longtime friend, Taylor Mine to start his own project, which turned into a full-on band. Now in 2015, the band has regrouped and released their second LP Straight In No Kissin’.

Performing only a few select dates around the album release, Ronnie Vannucci and Brooks Wackerman took a moment to speak with B-Sides host, Pete Mar, about their latest album, old school Lakers and more. Check out the interview: