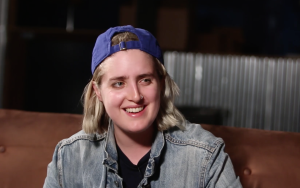 UK artist, Shura, has already garnered millions of views for her tracks, “Just Once” and “Touch”. A great start for the burgeoning artist who initially learned music production via YouTube tutorial videos. Coming from an already artistic family, Shura, who’s real name is Aleksandra Denton, has a brother who is a music producer himself and whose mother is a Russian actress and her father is a filmmaker. Shura generated critically positive reviews during her performances at SXSW 2015 and is poised to keep the momentum going upon her debut album release sometime in 2016.

B-Sides met up with Shura during her San Francisco tour stop to talk about her early beginnings, her competitive spirit and how the television show Friends is still a part of her life.