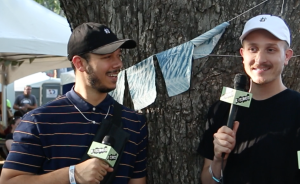 The duo of Flosstradamus has been a mainstay in numerous festivals ranging from Coachella, Lollapalooza, TomorrowWorld, SXSW, Ultra Music Festival, Electric Daisy Carnival and in 2015, Austin City Limits. Comprised of Chicago-based DJs J2K (Josh Young) and Autobot (Curt Cameruci), Flosstradamus has mainly released EPs, producing a handful of songs on a frequent basis where they’ve had multiple EPs released in a single year. Their live sets are known to be electrifying as they showcase a mix of hip-hop, trap and EDM that’s garnered a loyal fan-base otherwise known as, HDYNATION (Hoodie Nation).

B-Sides On-Air host, Pete Mar, spoke with Flosstradamus during the first weekend of Austin City Limits 2015 about performing at Zilker Park, their current residency in Las Vegas and more!

Check out the interview here: