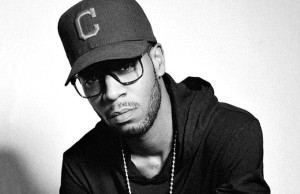 Throughout the last few years Kid Cudi has grown into an incredibly big artist, gathering over 10 million followers on Facebook and multiple videos that are well into the millions of views. Along this rise to success has been a tremendous amount of change and evolution to cudi’s sound. His first hit was 2009’s “Day n Night” and that would eventually launch the very powerful and incredibly well crafted career that is Kid Cudi. After creating the two critically acclaimed Man on the Moon albums, the anticipation for the final album in the trilogy rapidly grew. Instead of giving the fans that final masterpiece, Cudi instead choose to begin experimenting with his sound  in even more creative ways. His music shifted in tone and the focus of self production and instrumentation began to take center stage. In this experimental sound, Cudi has already released one rock themed album entitled WZRD, and plans to return to the genre with his latest project Speedin Bullet To Heaven. Cudi has promised that there will be no electronic sounds on the album, and he himself will play all of the guitar and bass.  So far Cudi has released the lead single “Confused”, and earlier this week he released two new songs from the project entitled “Judgmental Cunt” and “Wedding Tux”.

It’s clear that the sound of this album will be drastically different from anything else Cudi has ever done, and pushing the limits of creativity has become what he is known for. His large fan base is  comprised of all different types of people and his ability to dissolve the boundaries of genres has been one of the biggest reasons for his continued success in the industry. It’s an easy statement to say that no one else in the music industry is doing what Kid Cudi is doing. All three songs that have been released have their own feel and vibe to theme but seem to stay in the same acoustical category just as Cudi promised. The album is shaping up to be a grungy rock sound, and that seems to be exactly what he is going for. Cudi sounds comfortable with his singing as well as his instrumentation and the songs seem cohesive. On “Wedding Tux”, Cudi sings over a melodic guitar riff and expresses some of his views on relationships and women.”Judgmental Cunt” finds Cudi in a much more aggressive tone and rhythm, potentially addressing the same girl he speaks on in “Wedding Tux”.   As for some of his fans, it’s a mixed bag when it comes to an artist as big as Kid Cudi. Many of his fans are die-hard fans who will believe in whatever he puts his heart into, while the other half only enjoy his old stuff and constantly ask for him to stop changing his sound.

No matter which side of the fence you stand on, there is no debating that Cudi is a huge force in the hip-hop industry. He is already huge and now is branching out to an even broader reach of people with his genre bending creativity. Speeding Bullet to Heaven is shaping up to be one of the most anticipated albums of the year and Cudi is keeping people on the edge of their seat with announcements. The album is also reported to be a double disc CD including outtakes and unreleased jams.   While no release date has been set, it’s expected to drop before the end of this year. Look for it to add to Cud’s’ already great discography and push the limits of both is potential and a lot of his fans approval.  Check out all of the new tracks from his SoundCloud account, linked below.