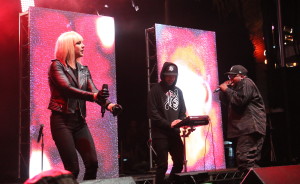 The much-talked-about and highly anticipated collaboration of the duo of Phantogram and Big Boi of Outkast has finally come to fruition. Their self-titled EP was released on September 25, 2015 with lead single, “Lights On” creating quite the buzz. Big Boi discovered Phantogram when their song “Mouthful of Diamonds” was playing in a pop-up ad and wound up digging the song. After many online exchanges and talks, they finally met in person when both were at Outside Lands Music Festival 2011 in San Francisco. Big Boi was so impressed by Phantogram, he featured them on three of the songs on his last solo album, Vicious Lies and Dangerous Rumors. Seeing that they met for the first time in the San Francisco Bay Area, it was apropos that trio played their first live show at Treasure Island Music Festival 2015. The energetic set featured songs from their recently released EP, as well as a guest appearance by Run The Jewels, who also performed at the festival, and featured on the track, “Born to Shine”.