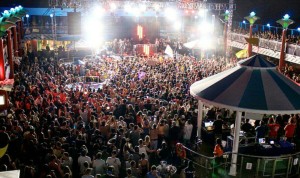 I woke up in the neatly folded bed in my giraffe onesie. The silence was what shocked me the most as I slogged around the room trying to figure out how I ended up there the night before. The bowling alley wasn’t even open for others on the ship. After minutes of walking around the desolate room, it became clear that due to lack of sleep (from the non-stop bass),  I had accidentally stumbled across the only peaceful room on the Mad Decent Boat Party.

This vague memory upon maiden voyage of the MDBP on the Norwegian Pearl, was one of the few highlights from the trip. After great turn out and with even better stories following the first ever four-day Mad Decent Label festival cruise, a second year was rapidly announced. The trip to the private island off the Caribbean in 2014 was an adventure that consisted of sleepless nights, non-stop crazy surprises, ongoing music and good vibes. The second edition was to set sail on the second weekend of November 2015 with the final destination being the tropical beaches of Cozumel, Mexico. It promised the returning and on-going belly flop contests, midnight artist collaborations and massive amounts of dancing. Mad Decent crew assured the public that “If you thought the first Mad Decent Boat Party was insane then get ready to have your mind blown.”

What no one was prepared for were the urgent cries howling “man overboard” coming from the 10th floor balcony room in the afternoon on the second night out of Miami. 24 year-old Kaylyn Rose Sommer from Charleston, South Carolina allegedly jumped from her balcony falling from over 80 ft into the dark waters.  A near 72-hour search party spanning over 1,300 nautical miles assisted by cutter ships and C-130 aircraft concluded with no luck.

“The music went off around 7 PM and there was silence around the ship. The boat did a 180 turn and everyone just had to wait around.” Ship passenger, Jeff Reeder was not shy of sharing his frustration with this years experiences. “People didn’t even care of what was going on. They were throwing objects from the balcony that would shine in the water making the search harder.”  The lack of respect and concern of the general public was noted and spoken about broadly until the performances were back on.

The shows continued later in the night after it was announced to passengers that Mexico would no longer be a stop due to the extended search for the young woman lost at sea. Nonetheless, the turn of events affected everyone including the artists. Oliver Heldens and Flosstradamus were quick to let their fans know that they would be forced to cancel performances due to flights scheduled to depart from Mexico. Others, including Thomas Jack and Dillon Francis gave their apologies and input as they were unable to board for their shows. Passengers were given a reimbursement of roughly $57 after fees and taxes were applied then deducted. Needless to say, it is unclear as to how this year’s Mad Decent Boat Party will affect plans for upcoming cruising festivals.

Apart from the madness, the show continued the best it could. Performances by A-Track and Curtis of Flosstradamous went on continuing with back to back performance by featured artists including Jauz, Ape Drums, and Etc! Etc! with the exception of JackÜ , who had to cancel due to weather, all other shows continued as planned.

Check out some of the artists that made it on board below: