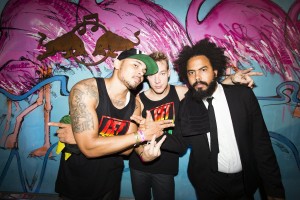 Coachella Valley and Arts Festival has always been known for its variety and good taste in music. This year, electronica seems to be all over the lineup as the genre increases in popularity. With more artist than can be named, the two weekends are going to be a dance party.

The buzz about headliners such as LCD Sound System and Calvin Harris show how swiftly electronic artists have made their way into the headlines of one of Americas favorite music festivals.  The 2016 lineup is littered with favorites bringing new and old tracks curated to put up much anticipated and original performances.

Big names like Zedd, Jack Ü , M83, Thomas Jack and Purity Ring are expected favorites but there are many other artists to look forward to. Friday is going to be a good day for all things funky and smooth. Bob Moses will be ripping the dance floor with his famous sets but he wont be the only Disk Jockey. DJ EZ, the quick and creative mixologist of all things electric has been winding up light and fast sounds.  For some old school talent that still brings the heat, you should familiarize with Black Coffee so you can look forward to some good Island House Music.

On the second day of the festival, the artist list continues. RÜFÜS DU SOL alongside Matoma will be united by fans looking to continue the tropical and light sounds. For something darker as the night sets in, RL Grime is a definite go to as he always puts down a filthy set. Mr. Carmack will be sure to complete the show as both artist have recently released new tracks.

John Digweed, who just launched his new tour, will be making a stop both Sundays. New music by Baauer should be interesting as will be whatever Soul Clap should have in store with their own group – Crew Love.

With many more artist left to mention, you can catch up on some new music from other artist that will be visiting the West Coast this Coachella:

George Fizgerald – For something dark and jingly you’re going to have to catch up on George Fizgerald’s latest debut album out now on Domino Records. Fading Love has great vocals and you can catch some of it below:

Goldroom – To keep the funk going with something a bit more light and fun, look forward to Goldroom. To re-emphasize ‘light and fun’ is exactly what comes to mind while enjoying the 2015 EP,  Embrace B-Sides. His prior EP was just as good or better:

Disclosure– Catching Disclosure live is one of the best things you can do. They have so many talented people on their tracks and they are also phenomenal. The album ‘Settle’ had top ratings seeing as how each song was amazing. Their last one, Caracal just came out recently and it’ll be a great addition to the Coachella vibe:

Lost Frequencies– This is the happy kind of music that takes you into a trance. The airy vocals and soft techno with escalating drops are a good combination. Check it out:

Zhu– His Track ‘Faded’ is well  known but is nothing compared to the last releases. He welcomes Skrillex, Aluna George, Bone Thugz Harmony among others. I highly recommend you familiarize yourself with them all:

Major Lazer – They have made it through a huge year reaching world wide breaking success. Their single ‘Lean on ‘ has been everywhere for the past couple of months. The rest of their songs are pretty good too:

Flume – An amazing producer whose unique style and creations have. He’s coming out with a new album soon and heres the preview of what hell be sure to share with the west coast.

For the entire Coachella 2016 line up, visit this page.