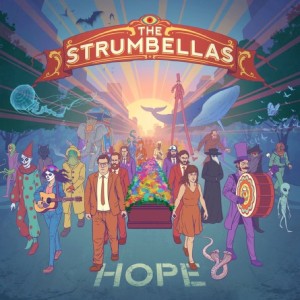 Canadian band, The Strumbrellas, is set to release their third studio album, Hope, on February 5, 2015 on Six Shooter Records. There’s much anticipation for new music from the band who were met with approval from fans and critics alike upon the release of their debut album, My Father And The Hunter in 2012. As their fan base grew, the band was quick with their follow-up in 2013, We Still Move On Dance Floors, which garnered multiple awards, including their first JUNO award for Roots and Traditional Album of the Year. Hope was recorded at Toronto’s Lincoln County Social Club with producer Dave Schiffman (Weezer, HAIM, Sky Ferreira) and its lead single, “Spirits” is out now.

Check out the lyric video for “Spirits” by The Strumbrellas-