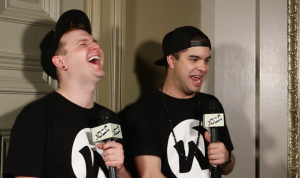 Ephwurd have been on fire after making their mysterious debut as a duo in early 2015. It wasn’t long before the masterminds behind this new project were revealed – dubstep/electro legend, Datsik and his tour manager, Bais Haus. Their first release was a remix of Major Lazer’s hit, “Lean On”, which was followed up by a collaboration with Jauz on “Rock The Party”. “Rock The Party” resonated with a huge audience, garnering nearly 6 million total plays on Soundcloud and YouTube. Ephwurd’s follow up, “Duckface” was one of autumn’s biggest hits and lead into their debut performance on the mainstage of Insomniac’s Escape: Psycho Circus Halloween festival in October. With new material and touring slated for 2016, Ephwurd is poised for more success.

B-Sides met up with the talented duo during their San Francisco debut at Ruby Skye to talk about their origins, touring, what the future of Datsik is and more.