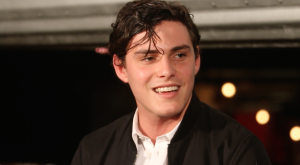 Glassnote Records artist Tor Miller started making music as an outlet for his frustrations and resentment towards having to move away from the life in Manhattan to New Jersey. At the age of 12, his parents made the move to the suburbs and it was during the commute to school with his mother that he would be exposed to David Bowie, Elton John and Fleetwood Mac. Miller kept to himself during school but his love of the music he fell in love with inspired him to take music lessons from a piano teacher who encouraged him to sing and ultimately write his own music. The native New Yorker describes himself during those formidable middle school years as “a complete outcast”, further stating, “I didn’t talk to anyone for about two years. But I was getting confident in my music, and wrote my first couple of songs, so I decided to perform at the eighth-grade talent show – and at that point, no one had really ever heard me even speak. I was so mad about moving schools and leaving all my friends, so I hadn’t participated in anything, but I got up there and performed a song I had just written, and immediately after, people suddenly wanted to talk to me, I got all this attention – especially from girls! It propelled me to keep going, and I started booking shows, open-mic nights in places like The Stone Pony in Asbury Park. I went to high school, and joined a jazz band there, and some of the guys in that joined my band, and we just carried on playing shows. But it all came from that first performance in eighth grade.”

His passion for music continued as he attended NYU, all the while honing his craft writing and performing when the song, “Hold The Phone” started getting exposure. The song was recorded on his phone and uploaded online where it gained traction when Zane Lowe named it as the Next Hype on his R1 show. Glassnote Records took note and signed the young singer/songwriter in early 2014, releasing his first EP Headlights in 2015.

B-Sides On-Air host, Pete Mar, sat down with Tor Miller to talk about his early beginnings, how the single “Carter & Cash” came about and more. Check out the interview!