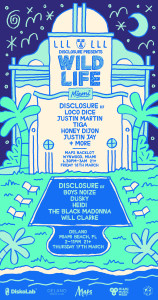 The Wildlife  is starting this Thursday. Spring breakers and EDM lovers will unite to bathe and dance to the wildest tunes at a pool party and night affair  headlined by Disclosure. For its second year in a row, Wildlife is making a Miami Music Week appearance in what’s expected to be a sunny couple of days in South Beach, Florida. The event will begin on Thursday at the Delano Beach Club and will continue the following night at Wynwood’s MAPS BACKLOT venue. Last year, the event featured hot funky beats by Claude VonStroke, Totally Enormous Extinct Dinosaurs, Felix Da Housecat, and Just Blaze, among others.

If you know Disclosure they probably took over your heart with world famous dance tunes. Their album “Settle” brought us awesome back-to-back tracks that made the album a favorite. After a nomination for Best Dance/Electronic album at the 2014 Grammy Awards, they followed with “Caracal” that was also nominated for the same award in 2016. With such success, they went on to create an event of their own. The Wild Life show series started back in 2014 and successfully traveled to cities all over the world including Ibiza, Vegas, Chicago, and Miami finally leading to the first ever Wildlife festival in the UK.

Rudimental is a group of musicians who pour their soul into every song they originate. Their live performances consist of a riled up band members with wicked voices and energy that impress. Together with Disclosure, they decided to collaborate and create an all out festival bringing together acts for an entire weekend in the UK. The 2 day event consisted of a diverse lineup featuring Nas, Seth Troxler, Wu Tang Clan, Gorgon City, Maya Jane Coles, and more. A complete success,the duo has confirmed the return of their Wildlife Festival in 2016, set to take place on June 11 and 12 at the Brighton Airport. The weekend event will once again be in conjunction with Rudimental, but with with even more diversity than the year before. Ice cube, Carl Cox, Bastille, Busta Rhymes, Flume Pusha T, Eats Everything, Julio Bashmore are only the beggining.

This year’s world tour will be stampeding towards Las Vegas, Miami and New York.

Catch tickets for the WildLife Miami 2016 party this Thursday March 17th at the Delano Beach Club starting at 2 pm then keep it going on Friday night at Wynwood starting at 9 PM. Here are some of the sounds you can look forward hearing at MMW these next couple of days from Justin Jay, Loco Dice, Heidi, Boys Noize and more.