INTERVIEW: POWERS on Writing, Their New EP, and What Makes a Song Great 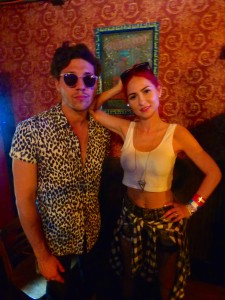 What happens when two successful songwriters with affinity for infectious electro-pop team up to perform their own material? The result is LA-based duo POWERS, comprised of Mike Del Rio and Crista Ru. Together Ru and Del Rio have worked with a variety of artists including Selena Gomez, Cheryl Cole, Christina Aguilera, Kylie Minogue, Tim McGraw, The Knocks, and Icona Pop. So what happens when you find yourself in a barn awaiting a freak electrical storm/ possibly a tornado with Mike and Crista discussing songwriting and performing their own material? As Mike puts it, “it’s very South By… strange noises everywhere.” Check out the full interview!

Despite the weather, are you loving SXSW and Austin?
Crista Ru: Absolutely. It’s insane, crazy, and super inspiring. I’m a little concerned that our gear is going to get swept off stage right now because they told us we had to leave the stage because there’s going to be an electrical storm or something.
Mike Del Rio: It’s (Austin) kind of like an eclectic meal of different people, different music, and it’s very colorful. I think we always- this is our first time playing officially as Powers, but I think we both have been here to Austin and to South By before and every time we leave its very, very inspiring. We always kind of come back to LA with a new trick, or a new color to try out.
CR: It’s insane, it’s hectic, it’s sweaty, it’s gross, but we are immersed in a bunch of music that we wouldn’t normally have heard in our every day life so it’s absolutely so inspiring. And also all of our friends and people we work with are here, so the hangs are strong.

Before POWERS you both started off writing and producing songs for some high profile names like Selena Gomez, Kylie Minogue, and Christina Aguilera to name a few.  The material as POWERS has been amazing, so why didn’t you keep the materials for yourselves?
MDR: We get a similar question here or there, but it’s never like “oh, this is for us” or “oh, this is for them,” but we just write from the same place. I think it’s always our energy and sometimes we don’t know where it’s going to go.  A good song should always have legs and sometimes it’s better through somebody else’s thing. The two of us write so much that we always write each song like it’s our last one, but I don’t know if that’s necessarily a good or a bad thing.  We just write a lot and if it’s funneled through another artist then so be it, but it’s usually always a really cool and sincere thing.
CR: For the songs that are really personal, and there’s a bunch of them, it’s a little hard to let them go. It wouldn’t feel right, it’s almost like giving away a child.

Is there ever a time when a personal song is too personal and you would almost rather have other artists express it while you stay anonymous?
CR: That’s the beauty of the music: you’re relating to people you don’t know, by exposing yourself to them. You expose your personal flaws, your worries, your doubts, your fears- everything. Your hopes, your dreams, you put it all out there. That’s the best part about it.

What have been the biggest advantages of working with a bigger production team and being with a label?

MDR: We’ve always had a really kind of self-sufficient team. The two of us write and produce everything. It’s very internal. We have an amazing manager, we have amazing publishers. We always have really incredible people around us at the core family/ start of it. So when we were deciding to go with Republic, or if we work with another booking agent or something, we try to treat everyone like family and vice versa. So the advantages of having a whole team working for the same common goal is incredible, but the two of us really – the control and vision still really comes from us. Having other people enact those other things is pretty awesome.

CR: Exactly. We hold it down creatively and they’re really, really good at doing all the intricate details and business stuff that we are not so good at and don’t have time to focus on.

What are some of the biggest lessons you have learned?

MDR: I still feel like we’re the underdogs. I think we’ll always feel that way. Both of us grew up rubbing nickels together and I think that old skill set of rubbing it together to make it look like gold is still – we’ll always have that. We’re so appreciative just to be in this position, be able to wake up and play music, have people connect to our feelings, and travel and see new places so we never take that for granted.

CR: We’ve really learned how to be patient. I think that’s the number one thing- just finding the strength to be patient and not just release music just to release it.  Be patient and and coming up with a goal and sticking to it.

MDR: Sometimes it’s a game of inches and it’s a lot of hurry up and wait. Patience is a virtue and everything is a process.

Is there a song or songs that you wish you had written?
MDR: Are we going to say the same thing?
CR: Might be the same thing. I think the most epic, beautiful, like well-written, and just moving song is “Bittersweet Symphony”.
MDR: Oh god, if they didn’t have that whole legal thing with The Rolling Stones, I would have said the same thing. I love “Hallelujah” by Leonard Cohen. It’s just one of those forever timeless, forever in it’s own realm of a song. It’s one of those transformative songs like “Bittersweet Symphony” where you listen to it and you’re immediately at the end of a movie or something. It completely elevates whatever moment you’re in and I think that’s what a good song can do.

So that would be your theme song…

MDR: My theme song is a different one. I’d probably do “Stayin Alive” as my theme song.
CR: The Rocky theme song is usually the one that I’m whistling to myself when I’m trying to do something, getting ready to go, carrying gear out to the van, or I’m in a rush. 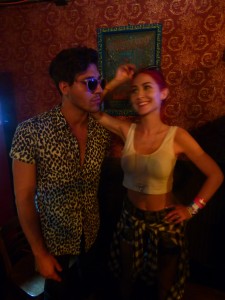 Now that you’re combining your amazing talents into POWERS what’s the songwriting process like?  Do you individually present ideas together, one works on melody while the other works on lyrics?
CR: It can go any which way. Sometimes we come up with stuff on our own time, just doing whatever we’re doing. Sometimes something’s sparked in the studio. Sometimes something’s sparked in the car. You could be listening to the blinker going off and it’s a little rhythm and an idea comes in your head. It’s hard to explain how these things happen. It’s like somebody’s shining a light on you, it’s only there for a brief second, and you have to try and get a picture of it before it goes.
MDR: The radio is always on. I think some great ideas are given to you and some you enable to happen, but it’s always on. We’re constantly writing. I wrote something today in the shower, it’s just constant ideas.
Would you say you usually find yourself  writing down a few lines or more like a whole song at once?
CR: Sometimes it just comes out. We’ll go back and fine-tune things and make it more cohesive, but sometimes you have a story or something inside of you that you just really want to share. Sometimes it’s a melody, sometimes it’s a sound that you just want to turn into a track.
MDR: We started going to clubs and getting kind of fucked up and just writing over the instrumentals.

Do you ever feel like you suffer from writer’s block?
CR: The voice memos and the notes in our phones are tell-tale signs of where it comes from.

MDR: You get inspiration everywhere, sometimes without notice.
CR: Yeah, I’m the crazy lady in the bathroom stall singing into her phone, at the grocery store, anywhere- it can happen anywhere.

You just released the Remix EP Legendary and there’s word of another EP coming. What’s the timetable for that release?  Are these going to combined into an album?
MDR: We have a new EP coming out in May. I feel like the way people consume music these days is seasonal. You have a winter line, you have a summer line, you have a fall line, spring…
CR: We just keep creating new stuff non-stop
MDR: We have a new single coming out in April. It’s really dope. It’s a great expansion on what the Legendary EP was. It’s really influenced by world music, it’s very colorful. We really couldn’t be more excited about it, but I think some of the songs from the first EP are going to be on our record eventually. 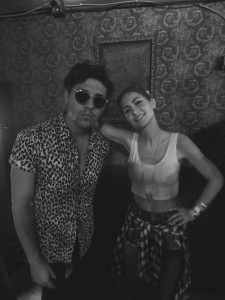 Mike, we saw on your Twitter that you were followed by Goth Dating.  Is there an inner Goth in you where we can expect some Sisters of Mercy inspired music sometime?
CR: What? Hold on, you were followed by Goth Dating? That is definitely really funny, first of all. Goth Dating. Did not know that! Thank you for sharing that with us.
MDR: I think it was on my personal account actually.
CR: No way!
MDR: Yeah, it was on my personal Twitter and I was like, “wow there we go”. I don’t know if it was goth, but I used to love Korn, Marilyn Manson, and Limp Bizkit.  There was moment in my life where that was everything and I’m still very proud to be a Korn fan. Korn is an amazing band.
CR: It was great music- Korn, Marilyn Manson
MDR: Even Limp Bizkit, all those guys can play. They’re amazing musicians.
CR: And System of a Down, do you remember that?
MDR: Yeah, that was a moment for me, that was a real moment for me.

What was the first CD you ever bought?
CR: God, I think it was Yellow Submarine Remastered.  I bought two at once actually, it was that and Bjork Post, I think.
MDR: Mine was Sgt. Pepper’s and Californication with my own money at 12 years old.  I remember going to Sam Goody, it was 1999, and it was Californication and Sgt. Pepper’s. My parents had The Beatles always playing at our house and I was in love so I bought Sgt. Pepper’s.

Follow POWERS on Instagram to stay updated on their upcoming single, next EP, and hopefully an album coming your way very soon.  Also be sure to follow Mike on Twitter to keep up with his variety of followers!