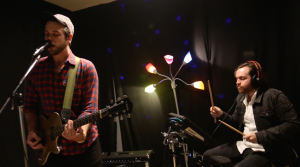 Midi Matilda have been keeping a low profile as of late but have been steadily working on new material. The Oakland-based duo of Styler Kilborn and Logan Grimé are a popular West Coast favorite who’s performed to packed shows, especially in the Bay Area that included a performance at Outside Lands in 2013. A month ago, the band released the song and accompanying video for “Tidal Wave” and just this week, released their newest single, “Talk About It”.

Midi Matilda was gracious to perform “Tidal Wave” for B-Sides at the Honey Hive Gallery in San Francisco and also spoke about making the video for the song, upcoming new music and more.