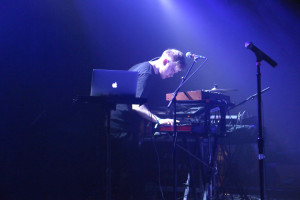 Mura Masa is a moniker for 20 year-old electronic music producer, songwriter and multi-instrumentalist, Alex Crossan. Hailing from Guernsey in the U.K., Mura Masa is derived from 16th century Japanese swordsmith Muramasa Sengo. Making music since he was a teenager, Mura Masa has gained a huge online following on the strength of his debut EP Someday Somewhere and the tracks “Firefly” and “What If I Go?”. Mura Masa is currently wrapping up his mini North American tour that included dates in Toronto, New York City, Chicago and a date in Los Angeles this weekend. B-Sides was at the San Francisco debut for Mura Masa, who was in tow with singers who have collaborated with him, Nao and Bonzai.

The sold out show at the 600+ capacity venue, The Independent, was filled with a diverse audience consisting of a majority of young millennials and thirty-somethings. Dublin-based singer, Bonzai, opened the festivities with a strong set. The singer had previously worked with East London singer-songwriter, NAO(who was also on the bill), as a back-up singer. Performing tracks from her EP “Royah”, Bonzai commanded the stage, impressing the crowds with “Doses” and “Noise”. NAO performed next to an enthusiastic crowd as she enthralled the audience as soon as she sang her first note. Accompanied by a small backing band, NAO, was flawless in her presentation as her vocals were buttery smooth as she moved around the stage performing tracks such as, “Apple Cherry”, “Zillionaire” and “Bad Blood”.

The switch-over from NAO’s set to the headliner was short as Mura Masa took the stage within 15-20 minutes. With a setup consisting of a laptop, keyboard and electronic drums, Mura Masa had the crowd jumping and dancing for the majority of his 50+ minute set. Not even a small glitch that prevented his keyboard from working in between songs deterred the crowd’s enthusiasm. Joined on stage by the night’s other performers, first with Bonzai, Mura Masa rolled through his collaborations with her on “Know Me Better” and the popular “What If I Go?”.

Refreshingly, the audience didn’t flood the scene with smartphones to Snapchat or take video as the more popular songs were played. A phone was out for less than a minute to capture the moment but then they were back to dancing and jumping throughout the set. Even when NAO joined on stage for the final song in “Firefly”, the audience was fully into it, letting Mura Masa know that San Francisco appreciated his music and couldn’t wait for more.

Check out photos from Mura Masa at The Independent in San Francisco, CA:

Mura Masa - What If I Go? (Official Video)