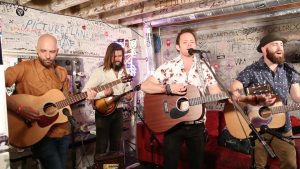 Los Angeles-based quartet The Rebel Light has been recently making waves with the track ‘Strangers’ over the last year. The band started with brothers Alan and Jarrett Steil, who moved from their native Montauk, NY to Ireland and formed the more electronic-oriented pop trio Suddyn in the late-2000s. The brothers relocated once again, this time to Southern California and teamed up with their cousin and eventual drummer, Brandon Cooke to form The Rebel Light. Bassist, Tim Witherow later joined the band after seeing them play a gig. The band will be bouncing between the studio and live performances for 2016 with more to come.

The Rebel Light played “Strangers” for B-Sides On-Air while in San Francisco and spoike about their formation and more!