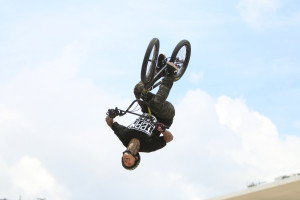 As with its counterpart in skateboarding, BMX Vert also began the BMX action at X Games Austin 2016. But in direct opposition to Skate Vert, BMX Vert gave us a podium filled with veterans and the old guard of the sport. Returning back to his familiar place on top of the podium was Jamie Bestwick, scoring his 14th X Games gold medal, one year after being dethroned after winning gold for nine straight years. Bestwick commented that he was actually relieved to have not won gold last year, as it took the pressure off of him to continue to win gold every year and allowed him to simply ride the best run that he could. Another sarcastic British rider, Simon Tabron, gave Bestwick a close race for gold but ultimately ended up with the silver medal, the 14th X Games medal of his career. Closing out the podium was the third longstanding veteran in the field, 49 year-old Dennis McCoy. In fact, when rapper G-Eazy came out to present the medals, the riders joked that they all were wondering who he was.

Saturday’s BMX fare began on the Circuit of the America’s start/finish straight with BMX Park. Dennis Enarson, who entered the day with five silver medals but no gold finally rose to the top of the podium with a winning combination of style and flow, giving him a well-deserved X Games gold medal. Australia’s Logan Martin, riding in his first career X Games, pulled through with the silver medal. Kyle Baldock, who entered the competition with four X Games medals—all gold— earned his first career Bronze medal with a spin-tastic run that saw him blasting high off every available surface.

After BMX Park finished, all the X Games athletes gathered around the park bowl to pay tribute to the late Dave Mirra, a pioneer in the sport of BMX who passed away in February. Everyone —fans and athletes together— participated in a minute of silence for Mirra, before longtime friend and fellow BMX rider Kevin Robinson delivered a moving tribute with Dave’s wife, daughters and mother in attendance. Following the tribute, the first ever Dave Mirra BMX Best Trick competition was held in the park to honor Mirra’s legacy. With the riders flying around the course in a jam format, Kyle Baldock emerged victorious with a monster 720 double tail-whip between the two bowls. Instead of the usual gold medals given out, Baldock received a gold bike pedal engraved to honor Mirra.

Once again, Garrett Reynolds was the story of X Games BMX Street. The 7-time X Games gold medalist’s wizardry on a bike was once again on display, finding Garrett spinning over rails that the rest of the field merely ground down. Sean Ricany, an X Games rookie at the age of 20, used a combination of technical rail work and bike spins off air to grab the silver medal. Snagging the bronze medal was Louisiana-native Broc Raiford. It was Raiford’s first career X Games medal after competing in the 2014 competition.

The BMX portion of X Games 2016 wrapped up on Sunday morning with BMX Dirt. Kevin Peraza, previously medal-less in two X Games appearances, finally pulled through on the victory with a massive front flip on the last gap of the course. Britain’s Ben Wallace, owner of a 2014 X Games Austin silver medal, repeated that accomplishment this time around, hitting all his tricks with some great flare. James Foster won his first X Games medal, finishing third with a ridiculous 360-barspin-double-tailwhip combination on the last jump.