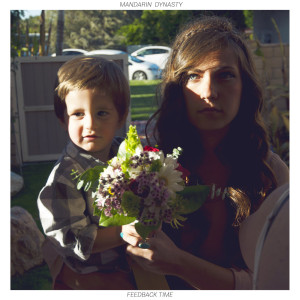 In late 2015 Mandarin Dynasty released their third album named Feedback Time. The band, formed in California by Mike Sherk then relocated to Portland, has played with a lot of more well-known indie bands. They may be considered underrated, but are quickly progressing in the indie pop scene.

When listening to Feedback Time, you will find yourself fully engaged in Mandarin Dynasty’s music. The first song is the title track and it’s a high bar to set for the entire album. There are a lot of musical harmonies and a sporadic burst of energy from the band. The melodies become very addicting similar to that which you would hear listening to Of Montreal, YACHT, or even Neutral Milk Hotel.

Another song on the A-Side of Feedback Time is “Mouth of the Party”, a fantastic tune which its name did not undermine the power of its name. “Mouth of the Party” is an excellent example of the standard progression and dynamic range of Mandarin Dynasty. The entire album flows very smoothly and is an album for hanging out and relaxing.
The songs tend to have a pop sound to them and the lyrics are very complex when analyzed. Regardless of what the brilliant lyrics are, the music is magnificent, just as the complete album is. You can purchase a digital copy of the album for $5 on Bandcamp or the vinyl record from their label Keeled Scales.