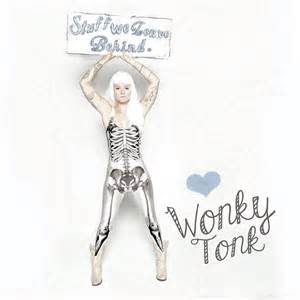 Country and Punk Music are natural cousins, however unnatural that sounds. Both come from an underground, rebellious, music of the people. The Clash knew this, as do, Ryan Adams, and Social Distortion. There is a soul in both genre’s that are fueled by angst, sorrow, and attitude. Unfortunately, new-age country is mere pop-music with the occasional banjo, but there are saviors of the old sound including Kacey Musgraves, Chris Stapleton, and Kentucky born Jasmine Poole who goes by the name Wonky Tonk.

Stuff We Leave Behind is a fresh cowgirl musing with a punk rock aesthetic. All of the songs on the record sound as comfortable with spikes on as around the campfire. Her travels are well-documented on the record, with many of the songs seemingly inspired about place, or the feeling of that place, that they all echo city, street, and country names. First song “Turn the Radio On” is an old-school a capella, Appalachian hymn similar, but not comparative, to the sultry sirens of Allison Krauss and Gillian Welch on the O Brother Where Art Thou Soundtrack. “Billings, MT” bring some distortion and pop that’ll never hurt anyone. “Washington Ave” is a twangy, feel-good walk on a summer day…about unrequited love. “Tennessee” is a slow waltz with a “movie credits rolling” vibe. “Montague Road” is a good use of happy, and “One for the Juke” is a good use of sad. “Saffin Ave” is the blistering culmination of the punk and country family, with the acoustic guitar, twang, and fast pop-punk rhythms.

Stuff We Leave Behind by Wonky Tonk is a great album with throwback country tendencies and a forward thinking sound. Poole can rock hard, and croon with the best. She does a good Loretta Lynn impression, with The Cramps style, and her sound is a force to reckon with.