ALBUM REVIEW: Dreamers – This Album Does Not Exist

Brooklyn, New York’s Dreamers are here to make your day brighter. The trio play smart, sunshiny, pop, and are unapologetic about it. Their debut LP This Album Does Not Exist is way more than their notion of “three minute tunes to perk you and make you shake”, and it’s spectacular. There are times in life when everything, even music, seems so damn heavy, and this band certainly understand that. I think Dreamers could make the next great indie record, but instead said “fuck it” and made a great pop record, just the type of record they wanted too….. And the listener can hear how much fun they have playing these songs, and it’s infectious, and who doesn’t love that?

Album opener “Drugs” is a late night, a little tipsy, when your jam comes on kind of dance. “Never Too 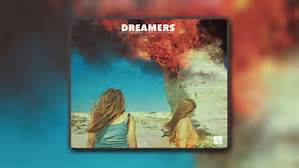 Late to Dance” is the song that comes on in the middle of a memorable party with group sing along fun. “Sweet Disaster” would sound good drinking a beer with the sun going down on the front porch. “Pain Killer” is a little punky, “Wolves (You Got Me)”, ran its way into the Top 20 with an earworm of a guitar lick. “Last Night on Earth” should be screamed into a swimming pool filled with cotton candy. “To The Fire” brings that little part of a song that you just feel foolish singing out loud, but do it anyway, when you’re by yourself.

The whole record is just a good time, with each song in its own little orbit of pure pop madness. This is the kind of record that might be the opposite off the thinking man’s song, but still holds meaning, albeit with a different perspective. I will most certainly be playing this at my next summer party, and Dreamers seem like the type of band that would accept my invitation to join in.

DREAMERS - Wolves (You Got Me) (Official Video)