Labor Day weekend is over and with it, Riot Fest Denver. But fear not, for in two weeks, Riot Fest Chicago is going down. This year’s notable headliners include The Flaming Lips, Morrissey and The Original Misfits alongside Death Cab For Cutie, Rob Zombie, Social Distortion, The Deftones, Jimmy Eat World and let’s not forget about the carnival atmosphere. B-Sides will be there to cover the insanely packed lineup the fest is toting this year and we put together a list of the top 5 desirables on the schedule.

The Misfits – Lets just get this out of the way. That’s right, THE MISFITS. Glenn Danzig is back fronting the band with the notorious fiend skull logo. Gel your hair into devil locks, thrown on your black armband, and get ready to scream because moments like this never last. They’re closing the festival for a reason, and you’d be damned to miss what that reason is. 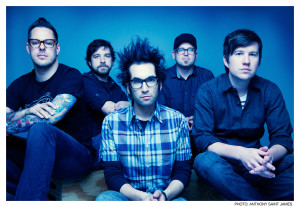 Motion City Soundtrack – These indie pop-punksters are calling it quits with this Riot Fest appearance. They’re not nearly as revered as they should be, and it’s a shame to see them go but, you bet your ass they’ll go out with a bang. Plus, how many times will you be able to catch a bands last show in your lifetime?

Motion City Soundtrack - "The Future Freaks Me Out"

The Descendents – Another legendary punk band, blink-182 and all the pop-punk bands that followed in their steps owe their careers to these guys. They’re notorious for rarely touring, and they’re currently doing so behind their incredible new album Hypercaffium Spazzinate. Don’t let their age fool you, the Descendents still know how to play punk rock.

Me First & the Gimme Gimmes – A punk cover band featuring members of NOFX, the Foo Fighters, Lagwagon, and the Swinging Utters? Check. Covers that range from “End of the Road” by Boyz II Men, to “Jolene” by Dolly Parton? Check. Hysterical stage banter and crowd interaction from the band? Cheeeeeck. Certain to be one of the most feel good sets of the festival, what isn’t convincing about screaming along to a punk rock version of “I Will Survive?”

The Hives – Another band notorious for their live shows, the Hives are what the Energizer Bunny has on his iPod. They haven’t toured extensively in recent years but, their last album came out in 2012 so, it’s likely they’re gearing up for something. Maybe they’ll play new songs but, there’s one song they’re sure to play and, it pretty much sums up you not heeding this advice at Riot Fest Chicago this year…

The Hives - Hate to Say I Told You So