For the 2nd time in LANY’s music history, they played in Florida and performed an epic concert in Fort Lauderdale, FL. They loved it so much that they told the audience they’d come back to show again. The energy was very high, and the crowd was incredibly excited at their entrance.

A majority of the time you’d expect for a band to walk into some randomly obscure sounds or to the drummer kicking it off. That was not the case for LANY as they provided a grand entrance to Whitney Houston singing the National Anthem on a giant screen. It all seemed randomly precise and, was beyond unexpected. 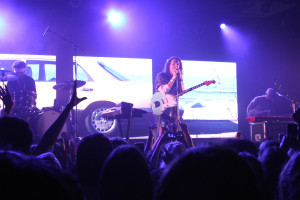 LANY played almost all of the fan favorite songs. As expected the crowd went crazy for the song “Where The Hell Are My Friends?” Debatably this might be one of their best songs as far as high-quality dynamic range and relatable lyrics. Regardless of if you’re feeling alone in a major city, as the words suggest, you quickly get consumed.

In June of 2016, LANY released their newest album called Kinda which resulted in their 2016 The Kinda Tour. LANY has blossomed and grown significantly. The audience fully embraced their performance, and they sang along with their entire new album. Even before seeing LANY, you can tell they are a wholesome band. After seeing them, you’ll know right away that it’s beyond organic dream pop which is very hard to find. It was a raw, real, and sincere concert performed with pride and vulnerability.

LANY - WHERE THE HELL ARE MY FRIENDS (Official Video)