UK’s Thirsty puts out really good music. When you mix former members of the notorious rock band The Quireboys, with renowned Russian lyricist and poet Irina D, and members of Squeeze and Saint Jude, something interesting happens. Thirsty formed in 2014 and released their self-titled debut shortly after to critical fanfare. The band typically writes songs based on the three-minute rule of 50’s rock, and the mantra of less is more, but the band’s cool mixture of rock and blues is cut from the same cloth as the Rolling Stones, Faces, or Lou Reed rather than the 80’s bands where the musicians cut their teeth. 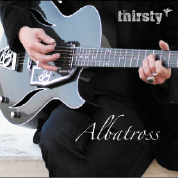 The band’s 2nd record, Albatross, is a good statement of what makes the band so accessible. The music brings a dark poetic cloud to the music that diminishes the sound. It’s not upbeat by anyone’s standards but that doesn’t take away from the music. Lead vocalist Guy Bailey sounds like he swallowed a box of nails while doing his best impersonation of Mick Jagger, or Jeff Lynne, or Ian Hunter, or any number of British singers. Lead single “The Albatross” turns any room into a smoky dive bar complete with cage in front of the stage. “Chaos” repeatedly tells the listener “My Name is Chaos” and one would expect a barn burner of a story, but Bailey’s delivery is monotone, and actually refreshing, in a tongue-in-cheek way. “Black Hole” is one of the catchier songs on the record, with chorus and pop-hook extravaganza. “Beat of Her Heart” offers great guitar work over a slowed down jam. “Patriotic Little Trash” has superb backing vocals from Saint Jude’s Lynne Jackman in the same vein as the Stones “Gimme Shelter”.

With all that said, the songs tend to be a little monotonous with the band really liking the formula they created. But even though the songs sound similar, they all meld into a really good album with crack musicians, and subtle nuances for that long drive home. Albatross is slated for release on November 7th.