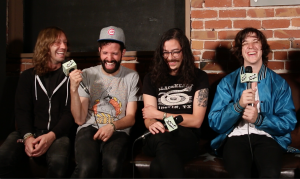 Chicago-based band The Kickback formed when founder Billy Yost had moved from his home state of South Dakota in pursuit of his goals of meeting like-minded musicians. Through a series of Craiglist ads and lineups, the band settled in and built a strong local following. Their debut album, Sorry All Over the Place was produced by Jim Eno of Spoon and garnered strong reviews, as their engaging live shows entertain the band’s growing fanbase. The video for the lead single, “Fanger” is a stop-motion visual that used over 2,500 photographs that was created by local Chicago animators David Wall and Lauren Travers of CineMiniature Pictures. The band recently completed their headlining tour in support of their debut LP and will be headed out for a handful of shows late December with alternative rock veterans, Bush.

The Kickback performed “Fanger” live for B-Sides On-Air at Brick and Mortar in San Francisco and also took some time to talk about their formation, music and more. Check out the interview below.