Lights All Night marked its seventh year with even more lights, effects, and talent.  For two days, the Dallas Market Hall was transformed into a raver’s paradise with the massive Mothership main stage equipped with state of the art screens and affects, the Satellite stage that was home to a variety of dubstep, trap, and trance, and the Silent Pyramid for anyone craving a nonstop silent disco.

Highlights from the first night included memorable sets from Tchami, Above & Beyond, and Zedd.  Although each drew a slightly different crowd, all three sets included a mix of old favorites and newer material that created vibes of nostalgia among the high energy crowd.  Over at the satellite stage, Kayzo and then 12th Planet made for the perfect openers for Crizzly.  One brave fan even climbed on stage to propose to his girlfriend on stage during the set.  However, she was so overwhelmed she slipped through a crack in the stage, but after saying yes.

Walking in to Night Two, one had to make a conscious effort not to run into someone in a mau5 head.  There were a few Marshmello bucket heads present although it was not clear why.  Mau5trap artist Rezz’s dark and deep set pulsed through the entire market hall as the crowd became more and more anxious to see Deadmau5.  Wolfgang Gartner and Cazette kept it slightly more upbeat on the satellite stage as Deadmau5 asked the crowd if they liked his floating (L.E.D) balls and called out a fan’s sign as being so 2001.

Loudpvck and Gladiator reunited after their song “Tony” for a back-to-back high energy set before Feed Me took over, while Kill the Noise’s set blasted from the Mothership stage.  A-Trak dropped yet another mix of “Bad and Boujee” and plenty of Kanye, owning the stage all the way through 2016.  He counted down to 2017 for the crowd with “Black Beatles”, balloons, and plenty of glitter confetti.  R.L. Grime shook the mothership with his mix of trap, bass, and hip hop while Nero kept it chill at the Satellite stage to close out the night, sending the crowd of with a good start to 2017. 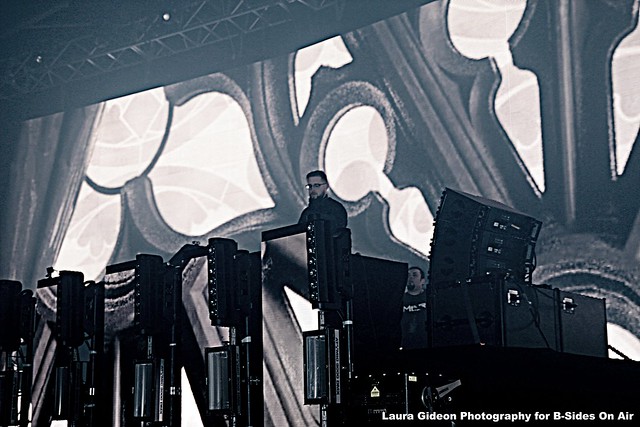