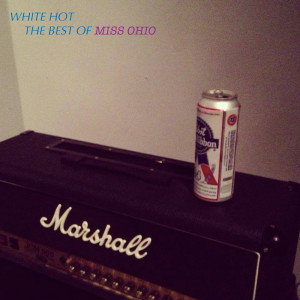 Miss Ohio finds itself in esteemed company. Some have compared them to the alt-country of Wilco without the artiness. They can jangle like Pavement, without the quirkiness, and the band have been straddling this Jersey grit / Americana line for 10+ years. The band now has a “best of” record entitled White Hot – The Best of Miss Ohio which is good enough to be in the same breath as those two bands above, but never received their fair chance. White Hot – The Best of Miss Ohio is exactly what it says. 12 really great examples of songwriting that rarely finds a down point. The album is raw enough to kink the muscles in your neck, but accessible enough to put in the background while resting your eyes, moody, electric, poignant, great for thinking about your first love, and understanding that it’s OK that they pop in your head from time to time, smiling and moving on.

The newly written and lead song on the album, “14”, is a start and stop head rocker with fireworks of guitars exploding keeping the listener on edge til the next one explodes. “Magnet” is a slow, pulsing, guitar laden daydream. “Carnival” is a rockabilly-tinged, good time song to dance to with a killer guitar solo towards the end. “Called and Raised” could fit nicely on a mixtape for your sweetheart.Songs like ”KGB”, “Bobby Fischer”, and “Simple Thing”  are certainly groovy enough to assist in forgetting the sadder songs on the record.

White Hot – The Best of Miss Ohio is a super duper record… OK that sounds cheesy….

The band builds a triumphant sound….

It will put you in that sentimental longing for high school vibe….

There are some records where you just nod your head yes when you hear it. This record happens to be one of those records.