It is always refreshing waiting outside your local venue in weather that does not involve shivering in your ripped converse as snow falls onto your head. In this case The Menzingers’ fans lined up on a cool summer night outside The Palladium for the sold out show. The indie rock band ended their three night appearance in Massachusetts on Sunday night before moving onto Buffalo, New York. Prior to the show, many remarked how fortunate they are to see the talented band in such an intimate venue. Right from the start, it was clear that the crowd was not going to let the tight quarters and immense amount of sweat dripping down their faces stop them from dancing their inner fan-girl out.

The Menzingers released a music video for AfterThe Party about four months ago. The artistic nature of this video captures not only the ups and downs of relationships but also the energy a crowd has for a band they have fallen head over heels for. It’s easy to imagine a scene where a room full people sing “But you just want to dance in a basement” to be what a Menzingers show would be like, and it was. Their set was like a real life music video of a crowd full of drunk, sober, and anything in between, jamming to each song as if they were trying to lose their voices.

Besides leaving Massachusetts in awe, The Menzingers left Worcester voiceless, sweaty, and lively from the wonderful lineup of one of a kind songs. 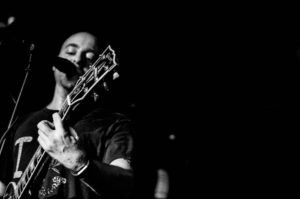