Swedish electro-pop artist, ionnalee (Jonna Lee) creates a distinctive musical style that showcases her skillful blending of her vocals with various instruments such as the guitar, keyboards, and drums. She released her first album, 10 Pieces, 10 Bruises, in 2007 after Swedish record label Razzia Records signed her. Although she released a five-track EP titled, This War, in 2008 and another album, This Is Jonna Lee, in 2009 with Razzia Records, she later formed her own independent label in 2010 called, “To whom it may concern” (TWIMC), which also led her to create an audiovisual project named, “iamamiwhoami”, with Claes Björklund. Since 2017, Lee is performing as “ionnalee” and she’d released an album in 2018 called Everyone Afraid To Be Forgotten.

On May 9, 2019, ionnalee brought her live interpretation of her music to the Great American Music Hall in San Francisco. The atmosphere was electric as the fans were excited to see ionnalee perform tracks from her forthcoming album, Remember The Future, set for release on May 31, 2019. Performing songs from the new album, “Open Sea” and “Some Body” the new material was accompanied by stunning visuals and choreography, especially the latter song that not only mirrored the music video but was elevated by the live performance. It was a perfect match of amazing vocals with visuals that kept the audience fixated on the show throughout the set.

ionnalee got the audience constantly dancing during every song that she sang, especially when the audience got to hear ionnalee sing tracks from her time in iamamiwhoami such as “Chasing Kites” and “Y”. While performing “Chasing Kites”, ionnalee wore a veil that was covered with small, illuminated balls of light and when she was performing “Y”, the background screen behind her displayed visuals of every move she made on the stage during the song, which further mesmerized the audience’s senses. ionnalee also composed a noteworthy performance on the keyboard when she performed “Islander”, another song from Remember The Future.

Check out the photos from ionnalee’s 05/09 concert at the Great American Music Hall: 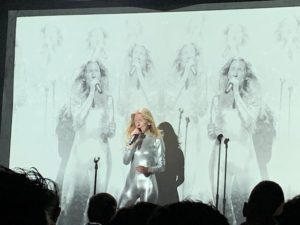