Marianas Trench is one of the few Canadian bands that have achieved mainstream success in both Canada and the United States. Lead vocalist Josh Ramsay created Marianas Trench in 2001 in Vancouver and since then, the pop-punk band has produced five studio albums and attained multiple nominations and awards, especially at the Juno Awards and the MuchMusic Video Awards, Canada’s leading music awards ceremonies. Some of their awards include “Group of the Year” at the 2013 Juno Awards and “Your Fave Video” and “Pop Video of the Year” for their respective songs, “Stutter” and “Desperate Measures”, at the 2013 MuchMusic Video Awards. On March 1, 2019, Marianas Trench released their fifth album, Phantoms, and within 24 hours of its release, it took the #1 spot on iTunes’ Pop genre, overtaking Ariana Grande’s thank u, next.

On June 3, 2019, the band performed a concert at The Fillmore in San Francisco as part of their Suspending Gravity tour. There were plenty of cheers and screams from the attendees, many of whom were teenagers, as they were excited to see Marianas Trench’s live performance. Not only did the band perform their past hit songs such as “Haven’t Had Enough” and “One Love”, they also performed tracks from Phantoms including “Echoes of You” and Your Ghost”. Although the concert’s atmosphere was mostly energetic, there were a few somber occasions when the band began performing tracks from Phantoms since the album’s theme is “ghosts of former love haunting one’s current life”. Nonetheless, the concert was still a thrilling experience for the audience, especially when Josh Ramsay walked to the floor and sang with them.

When the band began performing “Pop 101”, Ramsay told the audience that he was going to sing with them and everyone was ecstatic as they would get to see him stand in front of them. As he was protected by security guards, Ramsay walked down the stairs and high-fived the excited attendees who couldn’t believe that they were literally in front of their favorite artist. Ramsay and Marianas Trench certainly gave a performance worthy of leaving their audience with fond memories.. Ramsay’s short performance on the concert floor was a stand-out and it shows that he is an artist who genuinely wants to form and preserve a connection with his fans.

Check out the photos from Marianas Trench’s 06/03 concert at The Fillmore: 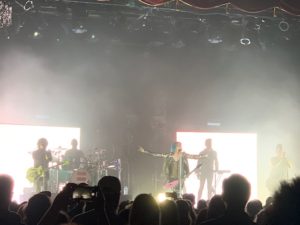 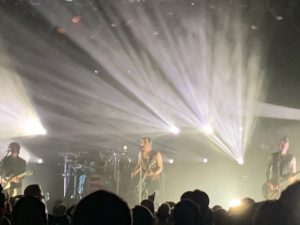