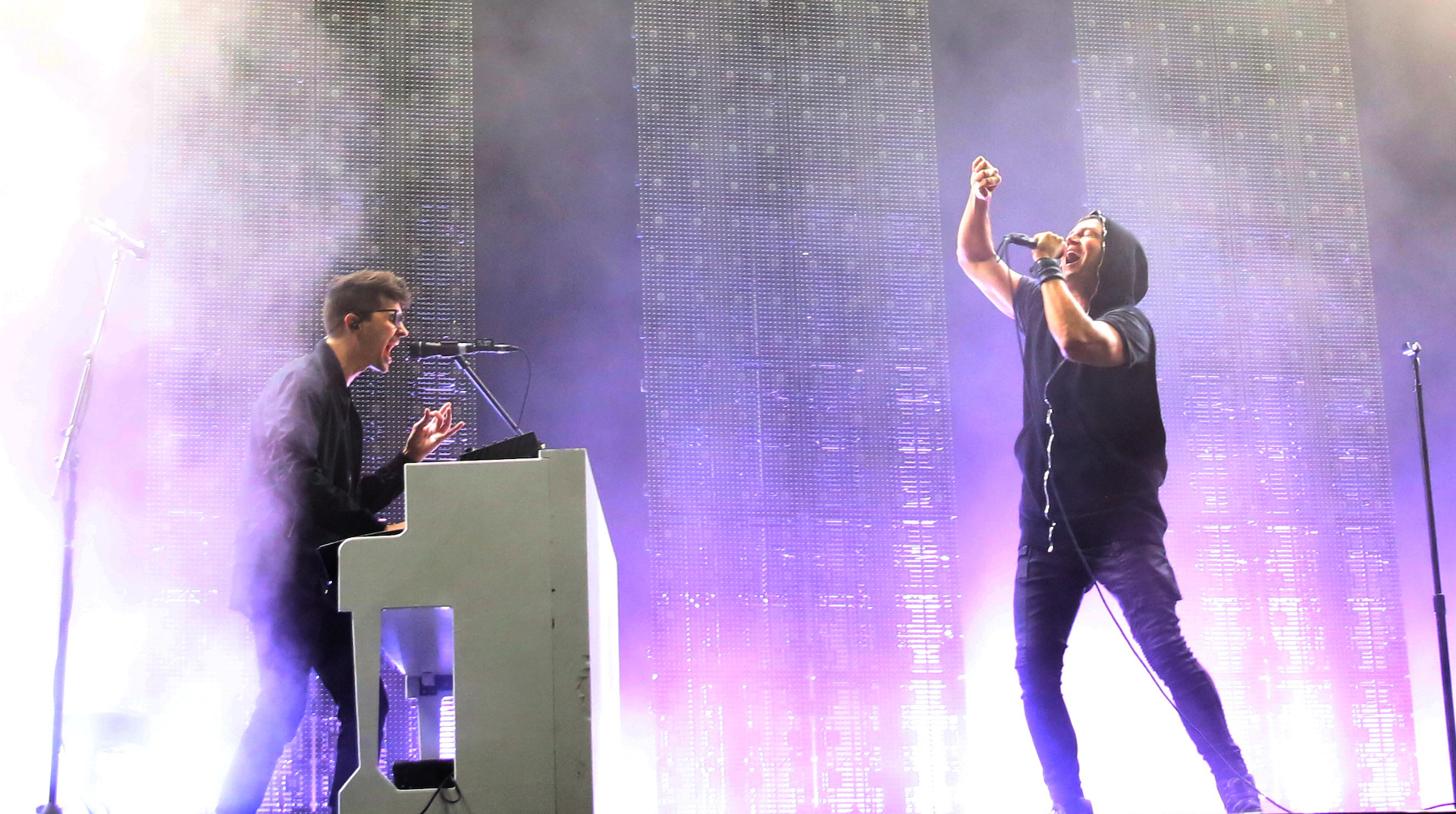 The nostalgia was running strong in San Francisco at the Bill Graham Civic Auditorium where Arizona natives Jimmy Eat World and local band Third Eye Blind captured the essence of late 90s/early 00s alternative music in one intimate night. Kicking off the night was New York group Ra Ra Riot, who opened up with “Beta Love“, which got the crowd going right from the start. Frontman Wes Miles joked after finishing their song, “Thanks for coming on-time” when they jumped back into their next baroque pop song “Absolutely“. Ra Ra Riot proved to be a worthy opener as they showcased their talents in a tight set and created enthusiasm for their forthcoming album, Superbloom, due August 9, 2019.

A quick intermission passed when a tight pack of people stretched all the way back to the bar and enclosed any open spaces in the semi-smokey pit. Flashing lights soon appeared on stage when Jimmy Eat World started with a fan favorite that reached #1 on the Alternative charts “Pain” off Futures. A couple of more songs into their set, they elevated the mood with their fourth album single “Bleed American“, in which the audience clapped in unison and people in the balcony could be seen headbanging and dancing.  Performing songs “I Will Steal You Back”, “Lucky Denver Mint“, and “Big Casino” from previous albums (Damage, Clarity, and Chase The Light), Jimmy Eat World reminded many of the depth of their catalog of music. They genuinely thanked the audience every time their songs ended and poured their souls into playing, showing how much they appreciated their fans and Third Eye Blind. It was when frontman Jim Adkins stated, “You guys are fantastic” that they transitioned into their softer song “Hear You Me“. The audience turned on their phone lights making the room look like it was filled with fireflies, with many lighting up their lighters. Adkins impressed that he was able to sing the song completely as he mentioned a past experience where he had to abruptly stop the song twice during a fight. From one mellow song to the next, they performed “Sure and Certain” off their ninth album Integrity Blues. Jimmy Eat World picked it right back up with their radio hit and fan favorite “Sweetness” where everybody echoed and sang back “Whoa-oh-oh-oh-oh”. Phones recording while they sang, the audience was so engaged that the band could’ve even performed it twice in a row. The band introduced their newer anthem song, last year’s release, “Love Never” that ended with an instrumental guitar solo from Tom Linton. All arms went up in the air when drummer Zach Lind kicked it off to another #1 song “The Middle“. Surprisingly no crowd surfing, but the perfect song to their finish their set and get the audience pumped for Third Eye Blind.

Third Eye Blind entered the stage behind a transparent curtain screen where their silhouettes were exposed making them look like giants or in this case the “Summer Gods”. The San Francisco band did a group hug before splitting into their positions on-stage. Keyboardist Colin CreeV played then frontman Stephan Jenkins sings “Screamer” as the special effects light twinkled over them creating almost a celestial sky. As he sang “Let me hear you scream”, the curtain dropped and everybody literally screamed at the sight of seeing them. Guitarist Kryz Reid strummed a familiar riff that leads into “Never Let You Go” off their sophomore album Blue. All the spotlight attention was directed onto the audience singing/whistling along while Jenkins shared the mic with them. Even though no one was wearing mood rings as the lyrics mention, people were fist pumping with glow-in-the-dark bracelets. Third Eye Blind jumped back into the groove with “Back To Zero” and “London”.  Jenkins took a break speaking to the crowd saying, “We finally made it back to Bill Graham! Another Planet Entertainment gave us our big break when we opened for Oasis back in 1996. We love you, San Francisco!” Third Eye Blind traced back to their classic roots while Jenkins jammed solo on stage with his acoustic guitar in “Graduate” and “Motorcycle Drive By” off their self-titled debut album. When they got into “Jumper“, fans were nodding their heads and singing their lungs out to “I wish you would step back from that ledge, my friend.” They went crazy when Jenkins did his iconic scream during the bridge. Although it didn’t exactly sound the same as it did back in 1998, it was just as enjoyable. Jenkins and bassist Alex LeCavalier got down to their next songs “Something in You” and “Crystal Baller”. Right after, they performed their 1997 single “How’s It Going To Be” and then returned for their encore that included “Semi-Charmed Life“, which people were waving their arms singing to “Doo-doo-doo,doo-doo-doo-doo”. It did feel like it was coming to an end especially hearing Jenkins sing within the lyrics “Goodbye”. The most exciting part of the show was definitely hearing the radio hits being played live. Third Eye Blind brought those 90s songs to life and gave us a memorable moment to experience that with them. It was only their second night of the Summer Gods Tour and they succeeded in making our summer!