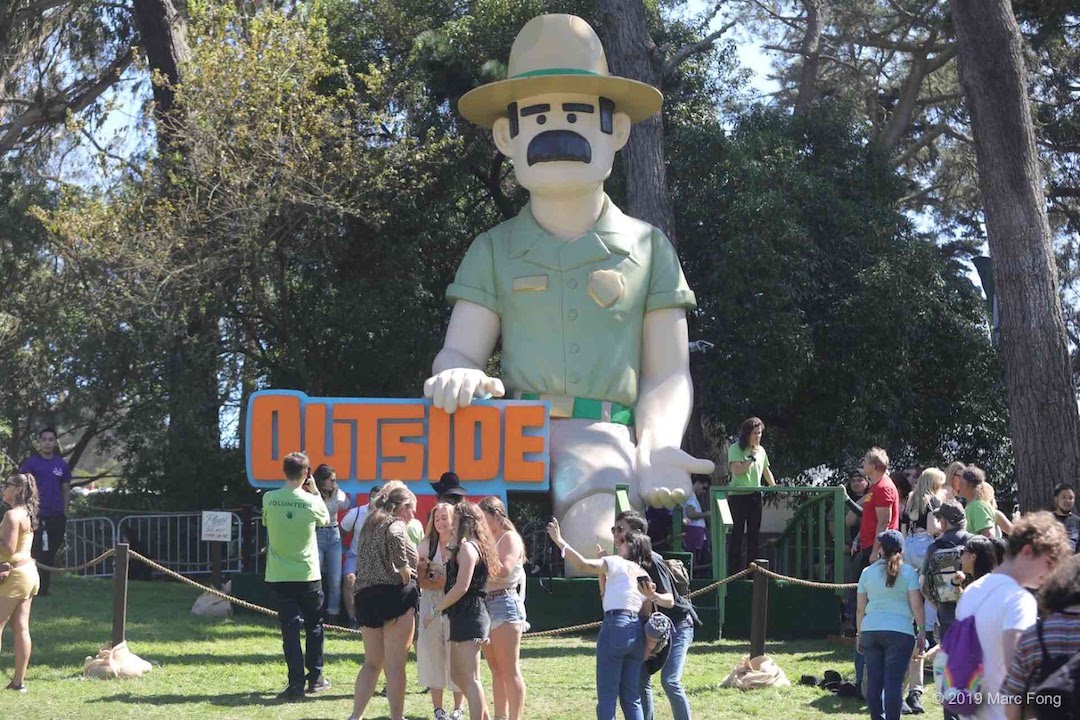 The 12th edition of Outside Lands took place over the weekend and it certainly was a celebration at the beautiful Golden Gate Park in San Francisco. With each day bringing its own unique approach towards planning on who to see, the infamous San Francisco fog was not a major factor this year. As expected, the headliners delivered as twenty one pilots showed their growth as performers with their engaging set on Friday, Childish Gambino drew what was reported the largest audience ever in the festival’s history and Paul Simon performed a set that reminded people why he’s one of music’s true legends. Meanwhile, there were many outstanding performances by emerging talents throughout the daytime lineups including Brasstracks, The Marías,CupcakKe, Delacey, Big Wild, Alex Lahey and SYML.

The first day of Outside Lands started off with the real star of the event- the sun! Those who got to the park early were already heading over to the Lands End stage when opener rap singer Taylor Bennett warmed up the small crowd. During his last song, he wasn’t afraid to approach the audience when he came off the stage singing directly to them. It was evident that many who showed up early were there to see twenty one pilots, as many were donned in the band’s t-shirts and had signs made up to show their appreciation for the band. Long Beach trio Half Alive was thoroughly entertaining, as their set was accompanied by backup dancers freestyling on stage. SoCal band The Neighbourhood hit the stage with their black and white aesthetic footage as they performed songs from their first three albums including “R.I.P 2 My Youth”, “Female Robbery”, “Afraid”, “Void”, “Prey”, “Daddy Issues”, “Sweater Weather”, “Stuck with Me”. During the last song, a fan asked lead singer Jesse Rutherford to strip and we got a shirtless tatted Jesse at the end of the set. Norwegian singer/songwriter Aurora was absolutely fun and engaging to watch perform on the Twin Peaks stage. As she pranced around the stage, the crowd danced in sync with her to upbeat songs like “Conquerer” and “Queendom”, while soaking in the slower “Running With The Wolves” and “The River”. Rapper Lil Wayne was a no-show for the first thirty minutes of his set as his DJs performed before he emerged and proceeded to perform a tight set that included fan-favorite, “Lollipop”. Fitting right into the festival was So.Cal band, The Marías, who performed on the Panhandle stage to a large enthusiastic crowd. Their groovy mid-tempo songs were a perfect soundtrack to the great weather and backdrop of the trees surrounding the stage, notably their songs “Cariño” and “I Don’t Know You” were perfect for their timeslot. blink-182 came out with a bang accompanied by smoke machines & pyro effects to their set that obviously had lots of crowd-surfing to “All The Small Things” and on the flip side, crooning to “I Miss You”. Headliners, twenty one pilots hit the Lands End stage to a raucous welcome, as drummer Josh Dun came on stage holding a torch. Highlighted by “Jumpsuit” and “My Blood” from Trench, “Heathens” (from the Suicide Squad soundtrack and where Joseph first played the piano), “Stressed Out” and “Lane Boy” off Blurryface, twenty one pilots are true showmen as they had a good variety of audience participation and story-telling. During “Ride”, Joseph asked the crowd to find a partner next to you so you can climb on their shoulders. In their next song, the audience held Dun and his drum set up as he played White Stripes’ “Seven Nation Army” then to a solo.

It wouldn’t be Outside Lands without an appearance by “Karl The Fog”, the pet name donned upon the San Francisco fog by locals. He made his appearance bright and early accompanied by a thick mist throughout the morning and early afternoon but it certainly didn’t deter any fans eager to see Wallows early on. Their set kicked off with a couple of covers including “Blister in the Sun” originally by The Violent Femmes and “Blackbird” by The Beatles before they took the audience to another level with originals highlighted by “Pictures of Girls” and “Scrawny”. As the fog finally lifted, shallou brought his chill electronic vibes to the Twin Peaks stage that was ever so befitting of his musicianship and stage visuals. Rappers Tierra Whack and CupcakKe were arguably the ones to watch from day two, as they have both experienced a steady growth in recognition and their live sets exceeded expectations. The flamboyant Whack performed a tight set of the short songs she’s known for like “Cable Guy” and “Fruit Salad” against a backdrop with a Green Eggs And Ham(Dr. Seuss). A shirtless Childish Gambino aka Donald Glover brought the house down as the headliner for the day, as he noted during his set that this was “the biggest crowd that Outside Lands has ever had.” Young and old danced and sang out loud during his set that may be one of the last times that he will perform as he stated that he will retire the musical project that is Childish Gambino after this tour.

The final day of Outside Lands turned out to be a full-on party with the best weather the festival has seen in years. Accompanied by warm temps, zero fog and an eager crowd streaming in, early performer Alex Lahey and Cherry Glazerr brought their brand of rock to the Sunday lineup. Lahey was a gem to witness as she performed a set filled with catchy tunes like “Every Day’s the Weekend”, “I Love You Like A Brother” and “Don’t Be So Hard On Yourself”. This year’s surprise Grammy winner for Album of the Year, Kacey Musgraves has performed at numerous high profile festivals this year, including Coachella and Lollapalooza and performing at Outside Lands was a reaffirmation of her recent ascension into the mainstream after spending numerous years honing her skills. Highlighted by songs from her Grammy award winning Golden Hour like “High Horse” and “Slow Burn”, expect to see more of Musgraves at future festivals and larger scale venues. The party was thriving as the sun set and Anderson.Paak & The Free Nationals took the stage. The reception was loud and the crowds nearly extended to the entrance gates for the band as the energy was contagious from the start as the band played “Heart Don’t Stand a Chance” to kick things off. The final performances of the evening by Paul Simon and Kygo certainly showed a cross section of the audiences attending the event, as there was a contingent at Kygo who had planned to split between the two. Demonstrating how music transcends generations, the crowd who started at Kygo and then trekked over to see Simon, were very familiar with the classics like “50 Ways to Leave Your Lover,” “The Boxer”(which he brought out Bob Weir of The Grateful Dead to perform with), “You Can Call Me Al” and “The Sound of Silence”. The very first line of the latter starts with “Hello darkness, my old friend”, which has been used in countless memes and perhaps was a gateway to Simon’s work for many of the young attendees. Either way, the performance by Simon showed that the 77 year-old legend still has it and proved to be a perfect artist to close out a festival in the heart of San Francisco.

Check out photos from Outside Lands 2019! Photo credit: Marc Fong